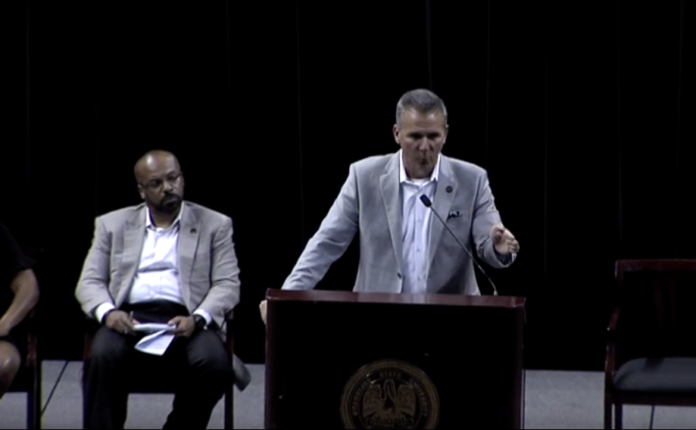 Meyer, who was the 2004 Eddie Robinson Coach of the Year recipient, was the inaugural guest speaker for the “Legacy Keepers: Preserving the Eddie Robinson Playbook” presented by State Farm at the Fredrick C. Hobdy Assembly Center.

“The Robinson Family is humbled by the support and participation of the Grambling community and surrounding areas during our initial 100th Birthday Commemoration events. We are thrilled to have Coach Urban Meyer join us in continuing the celebration of our grandfather Eddie Robinson,” expressed Robinson’s granddaughter Cherie Kirkland.

The former Buckeye head coach arrived on campus around 3:45 p.m. and met with Grambling State head football coach Broderick Fobbs for nearly a half hour. After the short meeting, Meyer spoke to the Tiger football team and coaching staff at Grambling Hall.

“When you meet with someone for a half hour to 45 minutes with someone who has been so successful in life, you tend to understand why he has been so successful,” Fobbs said about his meeting with Meyer. “He’s just so rich with information and I felt like I needed at least two or three more days to really dive into everything. Anybody that can make you better in a matter of minutes is someone that you want to be around.”

The three-time national championship coach made his way across the street at the Eddie G. Robinson Museum for a tour, followed by the VIP Meet and Greet at 5 p.m.

The VIP Meet and Greet concluded at 6:30 p.m. and Meyer made his way to the Fredrick C. Hobdy Assembly Center for the speaking engagement, where he was met outside by the World Famed Band.

Meyer spoke about a few things, but talked about how special the 2014 Ohio State National Championship team was. He shared to the importance of putting something else ahead of you.

In addition, Meyer shared his journey and path through the 2014 season, which ultimately ended up with Ohio State hoisting the national championship trophy.
Meyer, who recently joined Fox Sports College Football Pregame show as an analyst, won more than 80 percent of his games at Ohio State. The Ashtabula, Ohio native won 187 games during his collegiate coaching career as an FBS head coach, the most through 17 seasons in major college football history.

In addition, his 187 victories are the most in FBS since 2001, just ahead of Nick Saban, who has 185 over the same period. Both Meyer and Saban are also the only head coaches in the modern FBS era to win national championships at multiple schools. Meyer, who has three national champions since 2001 – two with Florida and one with Ohio State, share the honor with Saban, who won a national title at LSU and has since captured five at Alabama.

Among other serving as an analyst with Fox Sports on college football Saturday’s, Meyer is the assistant athletic director at The Ohio State University and a co-teacher of Leadership and Character in OSU’s Fisher College of Business.

Meyer is a 1986 graduate of the University of Cincinnati where he played defensive back. He received his master’s in sports administration from Ohio State in 1988.