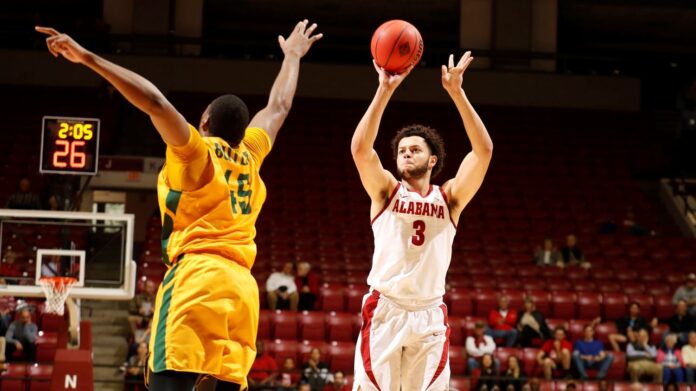 TUSCALOOSA, Ala. – Seven seasons ago, the Norfolk State men’s basketball team pulled off one of the biggest upsets in NCAA tournament history. On Wednesday evening at Coleman Coliseum, the Spartans scored another in a different postseason tournament.

In an NIT first-round game on the road, No. 8 seed Norfolk State stunned No. 1 seed Alabama by an 80-79 score in overtime.


Norfolk State kept its season alive while securing the MEAC’s fourth win in the NIT and the first during the current format of the tournament. Delaware State was the last team to win a game in the NIT in 2006, albeit as a No. 10 seed against a No. 9 seed when the tournament featured an opening round.

Since the tournament went to its current format in 2007 with 32 teams, NSU became the eighth No. 8 seed to topple a No. 1 seed in the first round and the first since Cal State Bakersfield in 2017. Including this season, top seeds are now 44-8 since 2007 against the No. 8 seeds in the first round.

Maryland Eastern Shore in 1974 and Coppin State in 1995 were the other MEAC schools along with DSU to win a game in the NIT before the Spartans.

The Spartans improved to 22-13 on the year and advanced to the next round to face No. 4 seed Colorado on the road. The exact date and time will be announced later. Alabama dropped to 18-16 to close out its season.

The Spartans got a big performance from senior Derrik Jamerson Jr., who scored 25 points thanks in part to 7-of-13 3-point shooting. He also added seven rebounds while finishing one 3-pointer short of the school record of eight.

It marked the second win ever for the Spartans over a current SEC team, with the other of course the program’s monumental win in the NCAA tournament in 2012. That year, the No. 15 seed Spartans topped No. 2 seed Missouri, then a member of the Big 12, by an 86-84 score. NSU was 1-11 against current teams in the SEC before Wednesday.

The Spartans nearly won it in regulation, as Alabama tied it up late with a 3-pointer before NSU missed a pair of opportunities at the rim. But they led for nearly all of overtime as the Crimson Tide’s last second shot for the win did not fall.

The game featured 14 lead changes, including nine in the second half after the Spartans had fallen behind by double digits. They won despite shooting just 37.5 percent for the game. But thanks in part to Jamerson, the Spartans sank 11 3-pointers, including several at key moments.

Alabama led by 10 late in the first half and again early in the second. But the tide turned for NSU from there. And Jamerson played a big part. He knocked down three 3-pointers for the Spartans during a 15-1 run to put the Spartans ahead 45-41. Junior Nic Thomas was nowhere near the 3-point line when he made one from deep with the shot clock about to expire, and senior Jordan Butler completed a 3-point play halfway through the period.

Eight of the nine lead changes in the second half came within a six-minute span. The last of those came when Jamerson hit a mid-range jumper and another 3-pointer for a 61-60 lead. The Spartans went up by four after Thomas made two free throws and senior Alex Long made a short jumper with 3:37 to go.

Alabama cut it to one prior to Long’s spinning jumper in the lane with a minute and a half left. With time running down, the Crimson Tide got a block on one end to set up one last chance. John Petty Jr. had the answer, draining one from deep with 18.8 seconds to go. The Spartans had a chance with 6.6 seconds to go, but a layup from junior Steven Whitley and a putback by senior Jordan Butler both came up just short.

It did not matter, as Jamerson’s 3-pointer on NSU’s first possession of the overtime got the Spartans going once again. Whitley later made one from the top of the key, and Jamerson sank his seventh trey of the night with 38.0 seconds to go for a 78-73 lead.

Herbert Jones had a 3-point play and a 3-pointer for Alabama with two free throws from Jamerson in between, all coming in the last 30 seconds of play. Jones’ shot with 6.1 seconds to go got the Crimson Tide to within one. They had one more chance after NSU turned it over on an inbounds play.

Alabama’s Riley Norris faked a 3-pointer and got off a tough shot at the buzzer along the baseline that only got the front-end of the iron.

Butler totaled a double-double of 11 points and 13 rebounds, and Long finished with nine points and 11 boards as well. The Spartans were +13 on the glass in the second half and finished with 21 offensive rebounds.

Alabama turned the ball over 16 times, as NSU outscored the Crimson Tide 21-12 in points off turnovers and 22-13 in second chance points.

NSU scored the first four points of the game and led 6-4 before Alabama scored 12 of the next 14 points to double up the Spartans, 16-8. NSU’s defense, however, helped lead an 8-0 run that tied the game with less than 10 minutes to go. Four different players scored during that time, including Butler who hit his fourth field goal of the game at that point.

Buckets by sophomore Mastadi Pitt and Whitley gave the Spartans a 22-21 lead with less than four minutes to go, but Alex Reese hit two free throws and then four straight 3-pointers for a 10-point Crimson Tide lead. Alabama went into the half up 35-28 after Jamerson’s last second 3-pointer.

Reese had 17 points for the game, all in the first half, hitting 5-of-8 from deep. Jones led Alabama with 18 points on 6-of-10 shooting. The Crimson Tide shot 42 percent for the night but were just 10-of-17 from the free throw line.