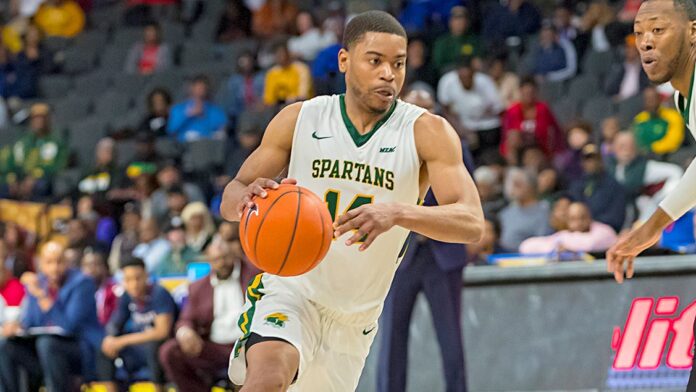 NORFOLK, Va. – MEAC regular-season champion Norfolk State will take on Alabama on Wednesday on the road in the National Invitation Tournament first round after the NIT bracket was announced on Sunday evening on ESPNU.

The Spartans will be a No. 8 seed in the tournament and will face No. 1 seed Crimson Tide at 7 p.m. on Wednesday at Coleman Coliseum in Tuscaloosa, Alabama. NSU secured the MEAC’s automatic bid to the NIT after capturing the regular season title at 14-2. The Spartans own a 21-13 overall record.

The game will be shown live on ESPNU. Fans can also listen to the game on WNSB Hot 91.1 FM with Ross Gordon on the call.

The Crimson Tide own an 18-15 record, including 8-10 in the SEC. The Spartans have played Alabama once, a 68-49 Crimson Tide win on Jan. 2, 2016 at Coleman Coliseum. The winner of Wednesday’s game will face the winner of the No. 4 seed Colorado vs. No. 5 seed Dayton matchup.

NSU will be making its second-ever NIT appearance after playing Virginia in 2013 as a No. 8 seed. The Spartans won the MEAC regular-season title that year at 16-0.

The Spartans, the No. 1 seed in the MEAC tournament, fell to No. 3 seed North Carolina Central by a 50-47 score on Saturday in the championship game.

The NIT first, second and quarterfinal rounds are played on campus sites, with the semifinals and final set for Madison Square Garden in New York City.