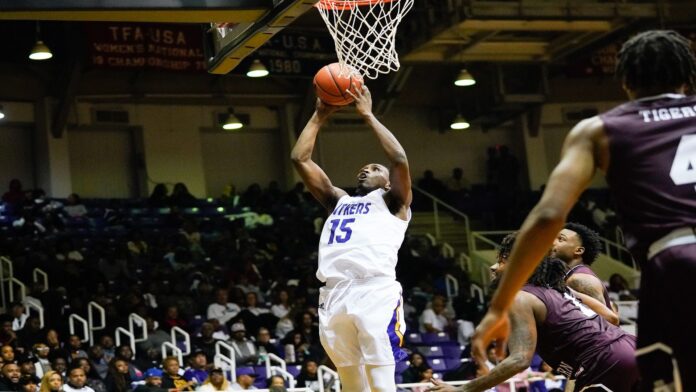 If this was the 1990s, the song ‘Here we go again’ by Portrait best describes today’s SWAC heavyweight championship men’s basketball match featuring No. 1 Prairie View A&M and No. 2 Texas Southern at 5 p.m. live on ESPNU.

Separated by only 51.2 miles of freeway asphalt in the Houston area, Texas Southern and Prairie View A&M will go toe-to-toe nearly 665 miles east in Birmingham, Ala. for the right to capture the Southwestern Athletic Conference’s automatic berth in the NCAA Men’s Basketball Championship. For Texas Southern, today’s game is business as usual and the opportunity to add another notch to its storied basketball legacy. For Prairie View A&M, the chance to cap off the school’s first 20-win season since 1962 and first regular season title since 2003 with a return to the “Big Dance” is at stake.

Let’s take a trip back down memory lane and recap the previous three contests with championship implications.

Despite a losing record, the 1997-98 edition of the Prairie View A&M Panthers were an experienced group which finished tied for sixth place but entered the tourney as a No. 7 seed due to tiebreakers. They won their first two tourney games by a combined total of six points and earned the right to face top-seeded SWAC Champion Texas Southern.

TSU opened the game like a SWAC Champion and led by 20 points at halftime but Prairie View A&M dug deep and relied on its seniors en route to a 21-6 run and arguably the greatest upset in SWAC Tournament history.

The SWAC’s return to Houston, Texas couldn’t have been scripted better as both TSU and Prairie View A&M’s men’s and women’s teams were in the title game at the Toyota Center. TSU cruised to the tournament finals as the No. 2 seed while No. 8 Prairie View had to fight its way in by winning three games in four days en route to the title game.

Prairie View, which fell in the title game in 2013, opened the championship game with a fast start en route to a 38-31 halftime lead. However, Prairie View began to wear down physically as TSU’s Aaric Murray wore the Panthers down on the inside with 27 points and 10 boards as the win clinched the Tigers’ fifth NCAA tournament bid in school history and first since 2003.

Even though this was a semifinal matchup, the winner was automatically guaranteed a berth to the NCAA Tournament due to the fact that the opponent in the championship game was ineligible for NCAA Tournament play.

TSU struck first as they broke open a close game to lead by double digits late in the first half before settling for an eight-point halftime lead. Prairie View would get within six early in the second half but TSU upped its lead and pulled away to win its second consecutive tournament title.