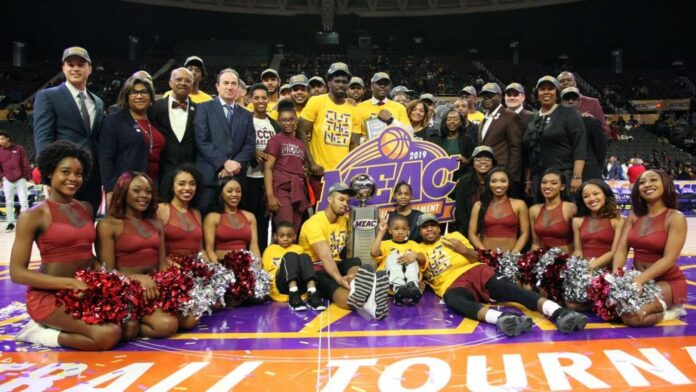 NORFOLK, Va. — North Carolina Central University had to grind out a win down the stretch against Norfolk State, and the Eagles watched a potential tying three-pointer skip off the iron as time expired to take the 2019 MEAC Tournament Championship, 50-47 on Saturday, March 16 at Scope Arena.


The two sides were narrowly separated in the first 20 minutes of play as the Eagles only were able to lead by two points, but NSU (21-13) was able to stretch the lead to as many as 10, and took a 32-22 lead to the locker room at the intermission.

The Eagles were held without a point over the final four minutes of play in the first half, but they immediately shifted into high gear after the restart, ripping off a 12-0 run over two minutes to pull the game level at 34-34 with 16:05 to play. The lead teetered back and forth from that point, but the Eagles were finally able to nose ahead at the 12-minute mark, stamped by four straight points from Zacarry Douglas (Landover, Md.).

The Eagles went on to build a seven-point lead with eight minutes to go, but from there the Spartans mounted a rally. NSU closed the game on a 7-3 run and again held the Eagles scoreless over the final four minutes of the contest.

The Spartans had a chance to once again send the game to an extra period, and again it was in the hands of Mastadi Pitt (Hampton, Va.) who sent the game to overtime at Echols Hall on Feb. 16. This time around, he faced a tough shot contest from Douglas, and the potential game-tying shot missed to the left to send the Eagles to the NCAA Tournament for a third consecutive year.

The Eagles clamped down on the Spartans in the second half, holding NSU to just 4-for-22 from mthe floor, and 0-5 from the perimeter.

Raasean Davis (Chicago, Ill.) was named Most Outstanding Player of the tournament after putting up eight points and a game-high 14 rebounds in the title game. Douglas also earned All-Tournament Team honors with a double-double against NSU with 10 points and 12 boards. Over the three games, Davis averaged 12.3 points and 8.7 rebounds, and Douglas contributed 9.0 points and 10.7 caroms.

The Eagles will now wait to see who they’ll face during the NCAA Tournament Selection Show on Sunday, March 17.