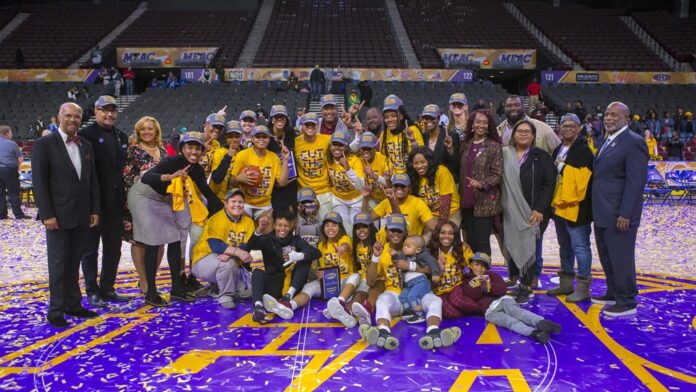 The Wildcats (21-10) won their second ever MEAC tournament title and claim the MEAC’s automatic NCAA Tournament bid. The NCAA women’s field will be unveiled Monday on ESPN at 7 p.m. EST.

“We had talked before we left campus that we had won every regular-season award there was to win,” Vanessa Blair-Lewis, the tournament’s Outstanding Coach, said. “Every type of trophy but this one. We didn’t care about all those awards or who they would go to this year. Keep all of them. We just wanted [the championship trophy].”

Golden, the tournament’s Outstanding Performer, has just five points at the break, as the fourth-seeded Spartans held a 23-17 lead after the first 20 minutes. But as the second half began, Bethune-Cookman mounted its charge, to the tune of a 14-3 run to take a 31-28 lead after Golden hit two free throws.

Armani Walker answered 30 seconds later with a 3-point play, giving the Wildcats the lead for good.

In fact, that basket kicked off a 15-3 run for Bethune-Cookman, which ended when Amaya Scott nailed a jumper at the 6:14 mark to give the Wildcats a 48-36 lead.

That was B-CU’s largest lead of the game.

In addition to Golden’s output, the Wildcats got 12 points from Scott and another 10 from freshman Camary Harris.

“This was the epitome of our season,” Spartans head coach Larry Vickers said. “All those times we had the lead in the third quarter, the fourth quarter, and we’d lose the game … it’s all part of the learning process.”