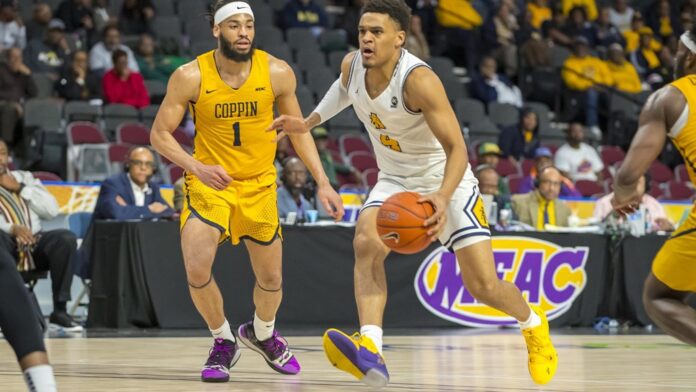 NORFOLK, Va., — Ronald Jackson came off the bench to score five of his game-high 21 points in overtime to help second-seeded North Carolina A&T State outlast No. 7 seed Coppin State 82-79 in an overtime thriller in the quarterfinals of the 2019 Mid-Eastern Athletic Conference (MEAC) Basketball Tournament at Scope Arena on Wednesday.

The Aggies advance to the semifinals to take on the winner of the North Carolina Central-Delaware State game on Friday at 8 p.m.

Jackson scored to give the Aggies an 80-78 lead with 17 seconds remaining. The Eagles’ Chad Andrews was fouled at the other end and hit one of two free throws, but A&T couldn’t hold onto the ball. The Eagles got the ball back with 11 seconds to play, but turned the ball over on the inbounds play.

Aaren Edmead made one of two free throws to give the Aggies an 82-79 lead with eight seconds to play. The Eagles got the ball back for one final possession but Dejuan Clayton missed the game-tying three-ball.

“Coppin State fought us to the end. But, these young men are very tough mentally,” Aggies head coach Jay Joyner said. “We didn’t play our best basketball, but we got the job done tonight.”

A&T led by as much as 11 midway through the second half, but Coppin State refused to go away.

“Can’t say enough about our guys, the way they fought, being down early late in the first half by eight, having to claw our way back into the game in the second half,” Coppin State head coach Juan Dixon said. “Our seniors, their leadership, their sacrifice, their hard work, their belief in our team and our young guys and their coaches.”

Coppin State was able to hang around despite committing 18 turnovers, which led to 24 points for the Aggies.

There were several times when the Aggies took advantage of the Eagles fatigue, who had to rebound after playing less than 24 hours ago in the first round.

Jackson led four Aggies in double figures with a double-double (21 points, 14 rebounds). Terry Harris and Qua Copeland finished with 14 points and five assists apiece. Kameron Langley had a double-double of his own with 10 points and 12 assists.