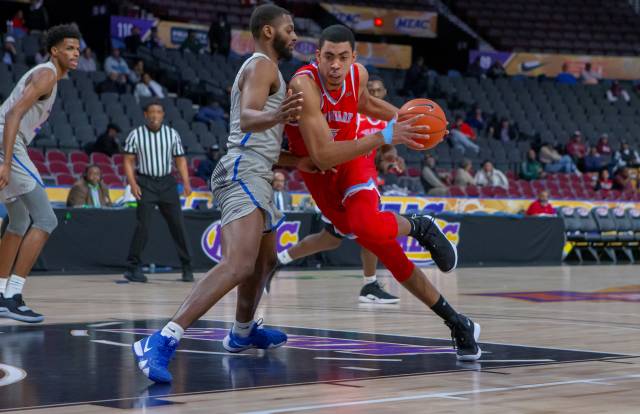 Norfolk, Va. — Delaware State played like anything but the lowest seed in the 2019 MEAC Men’s Basketball Tournament, turning in its grittiest performance of the season to defeat No. 6 Savannah State 71-67 in an opening-round game at the Scope Arena this evening.

The Hornets snapped a four-game MEAC Tournament losing streak and avenged a 76-73 regular season loss to Savannah State to advance to the tournament quarterfinals against No. 3 seed and defending champ North Carolina Central.

Delaware State led by as many as 17 in the second half and held off a late Savannah State rally to reach the tournament’s round of eight for the first time since 2015.

Kevin Larkin led four double-figure scorers for the Hornets with a game-high 19 points on seven-of-11 shooting from the field, including two three-pointers on four attempts. Larkin also led the Hornets with nine rebounds in the contest.

“I didn’t want this to be my last college game,” said Larkin, a graduate student and Georgetown, Del., native playing his final year of eligibility at DSU after previous stops at Cheyney and Niagara. “I knew we had a chance to win if we played hard and followed the game plan. It feels good to get a postseason win.”

“It’s been a tough year, but you get another chance in the postseason and we were able to take advantage,” said Edwards.

D’Marco Baucum contributed 12 points and seven rebounds, while Jonathan Mitchell came off the bench add 10, five rebounds and three steals for the Hornets.

Delaware State used an early second half spurt to open up the biggest lead of the game.

DSU was six-for-10 from the field, including three three-pointers, while Savannah State missed each of its eight shots and committed two turnovers during the Hornet rally.

After the Tigers pulled to within 61-55 on a three-pointer by Romani Hansen, the Hornets ran off the next five points, and opened up a 66-55 lead on a basket and free throw by Baucum with 3:22 left to play.

Delaware State missed five free throws over the next three minutes, allowing Savannah State to claw back into the contest. The Tigers pulled to within 69-67 on a layup by Zach Sellers off a DSU turnover with 15 seconds left, but Mitchell knocked down two at the line with eight ticks remaining to seal the win for the Hornets.

“Welcome to March basketball,” said Delaware State first-year head coach Eric Skeeters after winning his first postseason contest with the Hornets. “We could have closed out the game a little stronger, but we played extremely hard, especially on defense, and made some clutch shots to pull out the win. We’re still laying a new foundation here at Delaware State this was a character win for our program. ”

Zaquavian Smith and Tyrell Harper led Savannah State with 15 points each. Hansen had a game-high 11 rebounds for the Tigers.