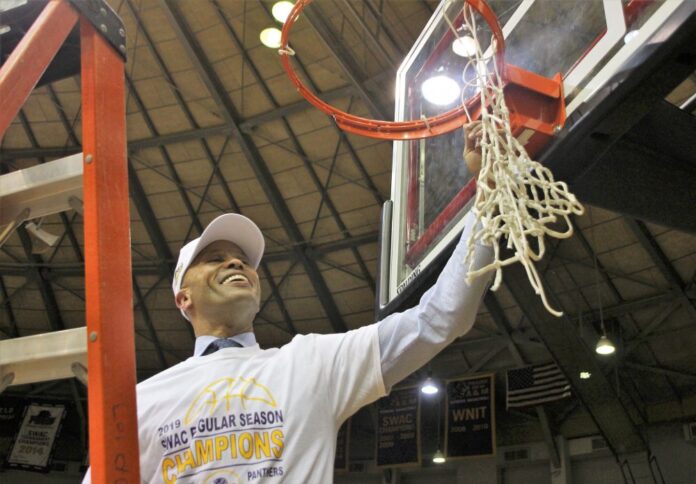 Three years ago, the keys to the Prairie View A&M men’s basketball program were handed over to Byron Smith for a trial run. That trial run laid the groundwork for his history-making 2018-19 campaign; who knew a 6-5 regular season record would mean so much?

After a pair of disappointing last-second losses in January of 2016, a change on the sideline was made after the Panthers opened conference play with a 1-6 record. Byron Smith replaced former head coach Byron Rimm II on an interim basis. With the move made on a Tuesday evening and the next game on a Saturday, there was little time for Smith and his young coaching staff of Landon Bussie and Keenan Currie to get their feet wet. The team was headed to Alabama for games at Alabama A&M and Alabama State.

An 83-69 loss at Alabama A&M greeted Smith, but the seed was planted late in the second half at Alabama State two days later. Down by 17 points with 5:36 remaining, the Panthers clawed and fought back en route to falling by only six points. However, a star was born as Jayrn Johnson scored a game-high 25 points and set the tone for something special.

One week later, Texas Southern visited Prairie View sporting an undefeated SWAC record. In what would become his mantra, Smith and his Panthers went right at TSU and jumped out to a 13-2 lead and led 32-24 at the half. The Panthers never backed down that night and took all of TSU’s best punches en route to a 59-55 win in front of a full house of happy Panther fans and shocked TSU fans.

After the win, fortunes began to change as the Panthers won four of their next five games. Included amongst the wins was a road sweep over Arkansas-Pine Bluff and Mississippi Valley State; marking the first time in decades the Panthers accomplished that feat. The wins didn’t come without drama. The Panthers had to deal with a tough crowd at UAPB during and after the game in addition to a back-and-forth affair against Mississippi Valley State. In that game against the Delta Devils, it took three Jayrn Johnson free throws with six-tenths of a second left to eke out a win en route to a Waffle House victory meal.

The Panthers closed out the season with a 2-2 mark, but went out in style as Smith’s Panthers dominated Southern University in Baton Rouge, La. Ja’Donta Blakley had a career game that afternoon with 18 points. The win was PVAMU’s first in Baton Rouge since 2010, the first season sweep over SU since the 2009-10 season and only the third win over SU since 2010.

The season would come to an abrupt end one week later on the courts of the Toyota Center in Houston as Jackson State would claim the win in the first round of the SWAC Tournament. However, then-athletic director Ashley Robinson had already seen enough as the interim tag was lifted off of Smith immediately thanks to guys such as Jayryn Johnson, Zach Hamilton, Ja’Donta Blakley, Nolan Wilson, Admassu Williams, Tevin Bellinger, Avery Lomax, Charleston Dobbs, and Karim York.

There are plenty of stories over Smith’s career as a player and coach which helped lay the foundation for this season’s success. However, that 6-5 regular season was all it took for him to prove that he deserved a shot as head coach and it paid off.

Once again, who knew a 6-5 record would mean so much?