BIRMINGHAM, Ala. –The Southwestern Athletic Conference (SWAC) has released its men’s and women’s bracket for the 2019 Toyota SWAC Men’s and Women’s Basketball Tournaments.

The action is set to begin at campus sites with the quarterfinal rounds held on March 12, with the higher seed hosting the lower seed. The semifinals and finals occur March 15-16 in Bill Harris Arena. All semifinal contests will be available live on ESPN3.

2019 Toyota SWAC Tournament Women’s Bracket
For the second-straight year, the Southern Jaguars (14-4 SWAC) enter the tournament as the top seed, clinching the regular season title outright on Saturday. They will face No. 8 seed Mississippi Valley State, who punched its ticket to the tournament with an 82-63 win over UAPB. Southern swept the regular season meetings between the teams.

Prairie View A&M (13-5 SWAC) earned the No. 2 seed and will take on No. 7 seed Alabama A&M. The Lady Panthers won both of the regular-season matchups over the Lady Bulldogs.

Perhaps the league’s hottest team at this point in the season, Jackson State (12-6 SWAC) comes in as the No. 3 seed and will take on No. 6 seed Alabama State (10-8). JSU defeated Alabama State 78-58 on March 9 to clinch home-court advantage in the quarterfinals. Jackson State has won 11 of its past 12 games, but Alabama State split the season series with the Lady Tigers, as both sides won on their respective home floors.

2019 Toyota SWAC Tournament Men’s Bracket
After winning their first SWAC regular season title since 2003, the Prairie View A&M Panthers head into the tournament as the No. 1 seed following a 17-1 record in conference play. PVAMU will host eighth-seeded Alcorn State (6-12). The Panthers swept the regular-season series between the teams, including a 98-64 win over the Braves this past Saturday.

Saturday rematches will be a theme of the opening round on the men’s side, as No. 2 seed Texas Southern (14-4 SWAC) will host No. 7 seed Southern (6-12 SWAC), who moved to its current seeding thanks to an 87-77 victory over the defending tournament champions in the teams’ regular-season finale.

Rounding out the opening round on the men’s side will be No. 4 seed Grambling State (10-8) taking on No. 5 seed UAPB (10-8 SWAC). Grambling State, the 2018 SWAC regular-season champion, swept the season series against last year’s tournament runner-up. 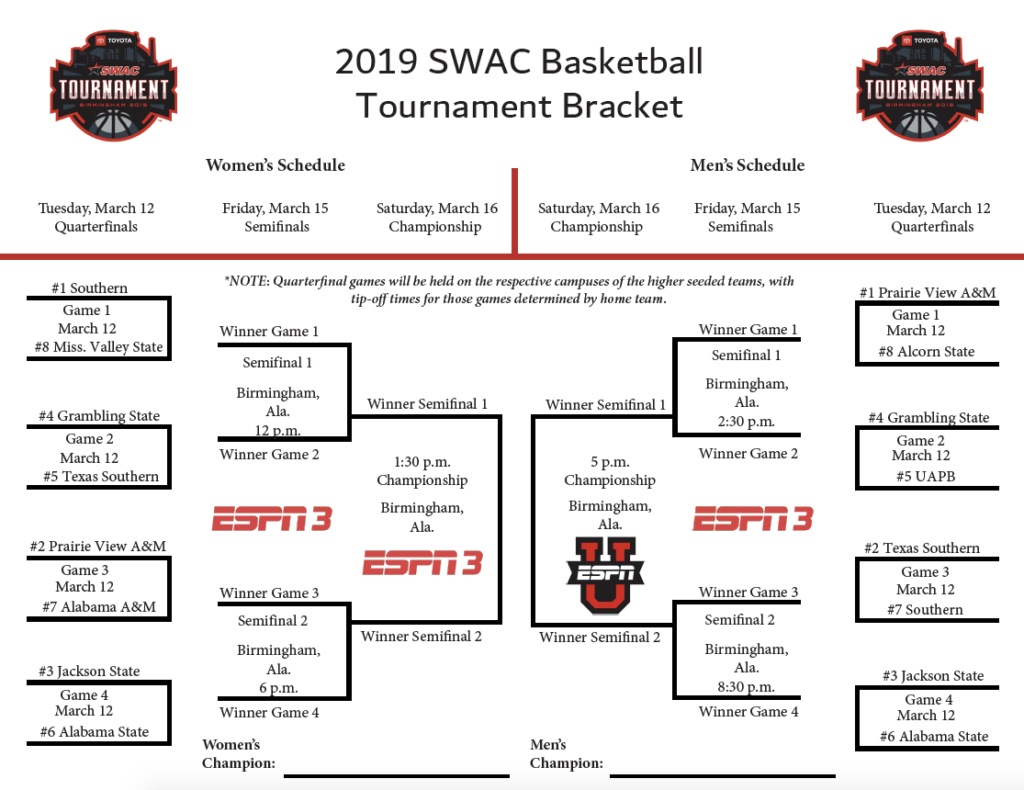