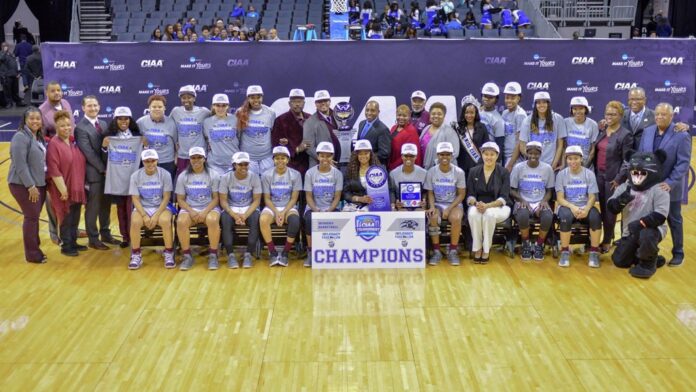 With the win, the Panthers (27-2) receive the conference’s automatic bid to the NCAA Division II Tournament where the team is expecting to be the #1 seed in the Atlantic Region. The back-to-back championships are the Panthers’ first since they captured the 1981 and 1982 tournament titles. The Broncos conclude their season with a record of 21-8.

“Fayetteville has done a great job, “said Panthers Head coach Ann Marie Gilbert “I’ve known coach King-Coleman for many years and she dominated the South Division last year at 10-0 and again this year she won her division so I first tip my hat to an outstanding coach who has done an incredible job with her team.”

McNeill’s 37 points brought her tournament total to 134, breaking the record of 123 points set by North Carolina Central University’s Jacqueline Pinnix set back in 1984. For her performance over the three games, McNeill was named the CIAA Tournament Most Valuable Player.

Carter finished the game with 18 points and 14 rebounds while Spivey dished out a game-high nine assists.
Bennett paced the Broncos with 11 points while Clifton pulled down 11 rebounds.

Fayetteville State opened the game on a 6-0 run but managed just two points for the remainder of the period as VUU outscored FSU 7-2 to trail 8-7.

The Panthers took control of the game with a huge second quarter, locking in on defense limiting the Broncos to just two field goals while turning up the offense, hitting 11 of 18 shots (61%) and outscoring the Broncos 33-5 to lead 40-13.
“I can‘t say enough about these Lady Panthers and the defense we have played in the last three games,” said Panthers Head Coach Ann Marie Gilbert. “This is two CIAA Tournament’s back-to-back that I thought our defense has been outstanding.”

Virginia Union opened with a 19-2 uprising and just turned on the afterburners from there, finishing the quarter on a 14-3 run. McNeill nearly equaled her 25-point first quarter performance set Tuesday against Livingstone with a 24-point effort in the second quarter today. Her layup at the 2:58 mark broke the CIAA record for points in a single tournament with 124.

The Broncos started the third quarter, like the first, with a 6-0 run, closing the gap to 19. The Panthers scored the next eight and eventually increased their lead to as many as 33 before the quarter ended. The Panthers lead would remain between 28 and 33 points for the remainder of the game.