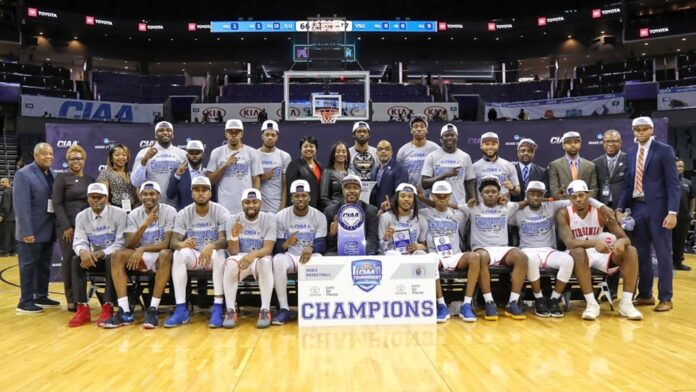 The Bears battled to turn a 31-point second half deficit into single-digits but their rally fell short despite a game-high 34 points from Junior Amir Hinton, who also finished with five rebounds, five steals, and three assists. Junior DaVaughn Kelsie added 17 points and freshman Geremy Taylor chipped in 12 points and four rebounds.

The Bears chipped the deficit to single digits after scoring five-straight, capped off by a steal and slam dunk from Hinton to force the Trojans to call a timeout with 9:21 on the clock. Two steals and fast break dunks from Hinton helped pull the Bears help bring the score to 27-22.

VSU held a 38-34 advantage of the Bears on the glass which led to a 19-6 frame for the Trojans in second-chance opportunities. Shaw never led the entire game despite its bench outscoring its opponents 66-13.

“I take my hat off to Coach [Lonnie] Blow and Virginia State on a wonderful season,” Shaw coach Joel Hopkins said. “They did a great job tonight.”

Virginia State (27-4) then doubled its lead again by closing out the first half on a 15-3 run for a 42-25 lead at halftime. A huge part of VSU’s run was a 22-13 advantage on the glass as the Trojans gathered 11 points in second-chance opportunities compared to the Bears who registered just two in the opening half.

The Bears committed three consecutive turnovers to start the second half and failed to score until the 15:18 mark when Kelsie hit a 3-pointer from the wing. The Bears trimmed the large margin to 12 after four straight baskets from Hinton with 8:08 remaining.

As time chipped away, the Bears continued to claw its way back by cutting the deficit down to single digits in the last 3:17 when Taylor hit a free throw but a poised Trojans team maintained control and stymied Shaw’s comeback effort with a jumper from Cedric Wiggins in the last 1:07 that ultimately sealed the win for VSU.

“It wasn’t perfect, but it doesn’t matter how many you win by,” said Blow, who has won three CIAA titles as a coach including 2010 at Saint Augustine’s. “We’re going to enjoy it, but we have more stuff to do.”