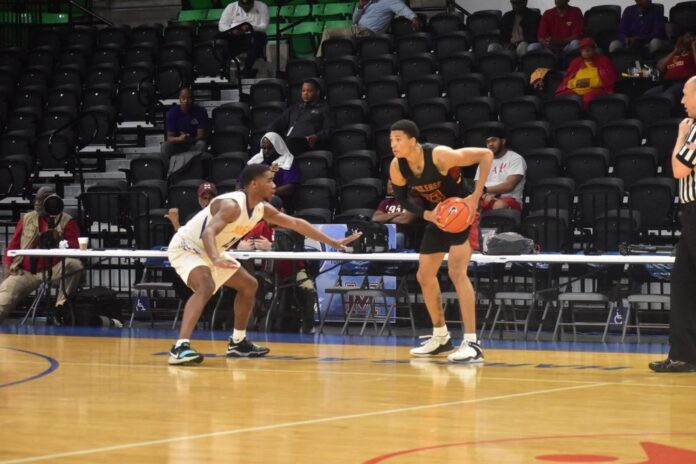 BIRMINGHAM, Ala. – The SIAC kicked off day one of the quarterfinals rounds for the 2019 SIAC Basketball Tournament as it featured two No. 1 seeds.

Game 10 (Women) No. 1 Tuskegee 72, No. 5 Spring Hill 58
Western division champions, Tuskegee, made their debut in the 2019 SIAC Basketball Tournament defeating Spring Hill, 72-58. Alexis Carter, SIAC Newcomer and Defensive Player of the Year, led Tuskegee’s offensive efforts scoring 32 points to add to Jade Wilson’s 16 to give the Golden Tigers’ an advantage. Tuskegee capitalized on Spring Hill’s mistakes scoring 23 points from turnovers. All-conference honoree, Tiffany Valentine, led in scoring for the Badgers with 17 points and three rebounds. Spring Hill falls to 12-16 on the season. Tuskegee will advance to the semifinals to face the winner of Albany State vs. Kentucky State (Game 14) on Friday, March 1 at 1 p.m.

Game 11 (Men) No. 1 Miles 54, No. 5 Tuskegee 39
Nathan Sheffield led Miles’ offense posting 16 points to lead the Golden Bears to their first win in the 2019 SIAC Basketball Tournament. Fuller and Harris followed up adding 22 additional points for Miles lifting them over Tuskegee, 54-39. Tuskegee’s slow start and multiple turnovers became costly for them as Miles took advantage and converted them into points. All-conference honoree, Myles Thomas, led in scoring for Tuskegee posting 10 points and four rebounds. Tuskegee falls to 13-15 on the season. Miles will advance to the semifinals to face the winner of Albany State vs. Lane (Game 15) on Friday, March 1 at 3:15 p.m.

Game 12 (Women) No. 4 Lane 74, No. 1 Benedict 61
Antrice McCoy of Lane was relentless and led the Dragons to their 74-61 upset of No. 1 seed Benedict who went undefeated during the regular season. Despite trailing after halftime, the Dragons followed up scoring 19 points in the final two quarters on turnovers from the Tigers. Ay’Anna Bey, SIAC Player of the Year, led the field for the Tigers collecting 23 points and seven rebounds to go along with Ayanna Armstead’s 13 points and nine rebounds. Benedict currently is ranked at No. 7 in the region but falls to 20-6 on the season. Lane will advance to face the winner of LeMoyne-Owen vs. Central State (Game 16) in the semifinals on Friday, March 1 at 5:30 p.m.

Game 13 (Men) No. 5 Paine 53, No. 1 Morehouse 49
Khalen Pinkett, Joshua Holliday, and Cameron Gaines dominated Paine’s offense as they pulled off a 53-49 upset over No. 1 Morehouse College. The Lions led going into the half until Morehouse begins to make comeback. With the score being tied three times, Paine drove home the win scoring 40 of their 53 points in the paint. With respect and pride at their helm, Paine refused to give in as Gaines lifted the Lions over the Maroon Tigers with a tip-in and a layup before sending Holliday to the line to seal the win. Getting off to a slow start, Morehouse’s leading scorer, Omar Alston, was held to collect 10 points and 12 rebounds. The Maroon Tigers fought hard to come back scoring 27 of their points from turnovers but came up short in the last moments of the game. Morehouse falls to 20-5 on the season and will await their destiny for the NCAA Tournament. Paine will move forward to the semifinal round where they are scheduled to meet the winner of LeMoyne-Owen vs. Clark Atlanta (Game 17) on Friday, March 1 at 7:45 p.m.