The dark cloud of NCAA infractions has marred Dawson Odums’s tenure as head football coach at Southern. Since Odums took over the helm of the Jaguars football program, he has dealt with everything from players getting pulled from team buses before games because of certification issues, and postseason bans preventing Southern from participating in the Celebration bowl in 2015 and 2016.

The Jaguars have even faced what would seem to be crippling program penalties that included three years of no spring practice, practicing only 16 hours a week and the loss of 15 scholarships over three years. Despite those setbacks, Odums and his staff have still been able to attract talented student-athletes that have produced one SWAC Championship, three SWAC West division titles and one Bayou Classic loss from a division title on two other occasions since the NCAA made its temporary home on Scott’s Bluff in July of 2013.


One of the signing day gems includes Washington Redskins cornerback and special team’s standout Danny Johnson. Coming out of East Feliciana (La.) High School, Johnson was a two-star prospect according to 247Sports and held only one FBS offer from Louisiana-Lafayette. That 2014 class also included Southern University’s all-time leading passer Austin Howard, and defensive stalwart Aaron Tiller, who eventually went to training camp with the Tennessee Titans. 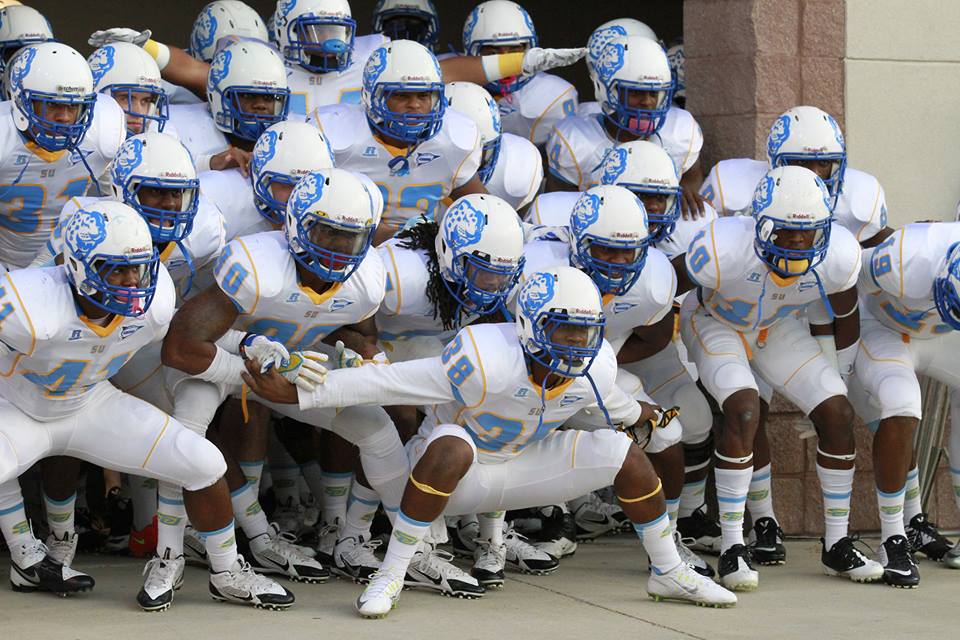 In 2016, the program was entering the eye of the NCAA sanctions storm, but Odums was still able to bring in Devon Benn from Louisiana high school football powerhouse, John Curtis. Benn, after redshirting in 2016, would go on to be a part of a potent one-two running back punch that included 2017 leading rusher Herb Edwards. By the way, Edwards joined the football team as a walk-on in 2014 from another Louisiana high school football powerhouse, St. Augustine in New Orleans. Benn now returns in 2019 coming off a 2018 season where he was the team’s leading rusher — rushing for 816 yards and averaging a healthy 5.1 yards per carry. The 2016 class also included Dakavian Champion, Kaycee Ntukogu, and Quentavious Monday, all of which have become valuable contributors to the Jaguar football program.

During the 2017 recruiting cycle, with a limited amount of scholarships, somehow Odums was able to bring in freshman walk-ons who were able to come in and make a significant impact immediately. Jamar Washington, at only five foot seven out of Alexandria’s Peabody High, was Southern’s second-leading receiver. That 2017 class also included probably the Jaguars most talented 2019 returning receiver Kendall Catalon. Offensive lineman Christopher Nash and defensive tackle Hunter Clay are also walk-ons from the 2017 class that were contributors on the 2018 SWAC West championship team.

The 2018 class saw Odums bring in impact players like Louisiana AP Defensive Freshman of the Year Jordan Lewis, and kicker Martell Fontenot from Zachary, La. who developed into a reliable short-range field goal kicker as a true freshman. But the most significant impact player from that 2018 class was the dynamic and electrifying quarterback Ladarius Skelton, who after an underwhelming 2-3 start, was inserted as the Jags’ starting quarterback. Skelton proceeded to lead the Jaguars to five straight wins and a berth in the SWAC Championship Game for the first time since 2014.

Today Odums and his football program find themselves clear of NCAA sanctions for the first time since he became the interim head coach in 2012, and the 2019 recruiting class — on paper — reflects that. On signing day Odums revealed a class that featured 18 players, nine of which are 3-star athletes. The class is headlined by Bertrand Carrell, a 3-star safety from Madison Prep in Baton Rouge, who held an offer from LSU early in the recruiting process. Carrell picked the Jaguars over the likes of Arizona, Missouri, Arkansas State, and Kentucky.

With sanctions in the Jags’ rearview, Odums and his staff are now able to do something they did not have the luxury of doing before: bring in FBS transfers. The 2019 class includes five FBS transfers, including Iowa State cornerback O.J. Tucker, who is expected to replace the graduated Demerio Houston. Now with that hovering NCAA cloud gone, it is now time to see if Odums can turn a perennial SWAC championship contender into a perennial SWAC championship winner.

By HBCU Sports4 hours ago
Football