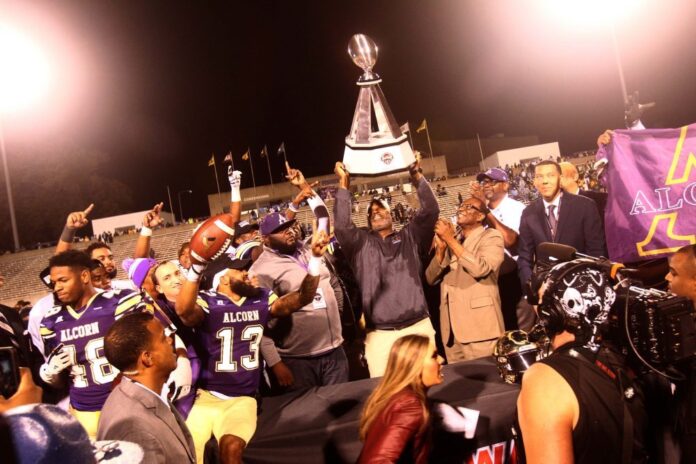 LORMAN, MS. – In a thrilling back-and-forth affair, Alcorn State rallied late and controlled the fourth quarter to outlast Southern 37-28 to claim their third SWAC Football Championship in the past five seasons and 16th conference title overall on Saturday at Jack Spinks-Marino Casem Stadium.

The Braves (9-3) advance to the Celebration Bowl as Alcorn State will represent the SWAC in the Air Force Reserve Celebration Bowl against MEAC representative North Carolina A&T, who also won their conference. The historic matchup will take place on Saturday, Dec. 15 from Mercedes-Benz Stadium in Atlanta, Ga. with a kickoff set for noon ET / 11 a.m. CT.

In front of a capacity crowd of 22,500 fans, redshirt junior quarterback Noah Johnson combined for 282 yards as he completed 18-of-25 passes for 135 yards and ran 16 times for 147 yards with two rushing touchdowns. Johnson was named the Offensive Most Valuable Player.

Brelion Hollis tied the team-high in tackles with seven and also had a half a tackle for a loss of three yards with half a sack to lead the Braves. The junior linebacker from Monroe, La. was named the Defensive Most Valuable Player of the Game.

It also marked the first SWAC Championship title in three seasons for head coach Fred McNair, who has made it to the big game in all three seasons at the helm.

SWAC Newcomer of the Year De’Shawn Waller averaged a robust 11.1 yards per carry as the junior racked up a game-high 177 yards on just 16 totes. Waller also flirted with the record for most yards in a SWAC title game (Fellow Brave Darryan Ragsdale-191 rushing yards versus Grambling State in the 2015 championship game).

Waller came out on hot early as he broke through with two first-quarter touchdowns, one on a 13-yard scamper with 8:35 remaining to a cap an eight-play, 75-yard drive in 3:51, and the second on a game-breaking 83-yard touchdown run where he burst by all defenders without hardly being touched with 6:03 left.

The 83-yard run was the second longest in SWAC Football Championship Game history. Ragsdale retained his record-holding 84-yard touchdown in the 2015 title game against Grambling State.

In the fourth quarter, Waller came alive again as the Atlanta, Ga. native put it away with a 14-yard touchdown run up the middle to finish out a clock-eating 5:12 drive that spanned 68 yards on nine plays.

Sophomore quarterback Ladarius Skelton gave the Jaguars (7-4) opportunities to win as the sophomore finished 12-of-22 passes for 194 yards with one touchdown and one interception. The Pine Bluff, Ark. native added 100 yards on 22 rushes and three touchdowns on the ground.

Skelton took the Jaguars right down the field on the opening drive encompassing 54 yards in six plays that were punctuated with a 28-yard touchdown where Skelton took it himself.

After Alcorn State took a 14-7 lead, Southern answered with a nine-play, 78-yard drive and found paydirt when graduate stud and wide receiver Trey Smith caught a 22-yard touchdown reception from the arm of Skelton to make it 14-14 after a Martell Fontenot PAT.

The defense tightened significantly in the second quarter as Southern recovered a fumble and the teams traded punts. The quarter was also marred by penalties as the Braves committed 10 penalties for 90 yards in the opening half.

Skelton briefly left the game with 10:32 left with an apparent injury in favor of John Lampley, who started the first portion of the season. However, after Southern punted it way, Skelton returned to the game with 7:24 left.

Initially, it appeared that Alcorn State had a go-ahead score when it attempted to go for it on a fourth and two from their own 38-yard line with 2:40 left and had a touchdown run called back due to a holding penalty. Instead, the Braves punted too deep with a touchback.

Junior defensive back Javen Morrison positioned himself to make an interception on an underthrown deep shot from Skelton and returned it 38 yards to get Alcorn into Southern territory. The Braves drove the short field of 25 yards on four plays and capped with a 1-yard QB sneak over the top as Johnson put the ball up high and over the goal line. The Southern defense knocked it loose, but Johnson was ruled as already have crossed the plane.

The Jaguars responded in a big way by marching down in six plays for 73 yards with a key 42-yard reception reeled in from Hunter Register that brought Southern to the Alcorn State 1-yard line. On the next play, Skelton found the end zone by taking it himself to help cut the lead to 27-21 with 8:46 left in the third quarter.

After Alcorn lost six yards on their next drive, it was forced to punt and Southern went took the lead with a nine-play, 57-yard drive as Skelton evaded defenders for his third rushing score on the day. The PAT by Martell Fontenot put Southern up 28-27 with 3:56 left.

Alcorn State recaptured the lead after driving 69 yards to set up a 41-yard field goal by Corey McCullough to put the Braves back on top 30-28 with 11:31 left.