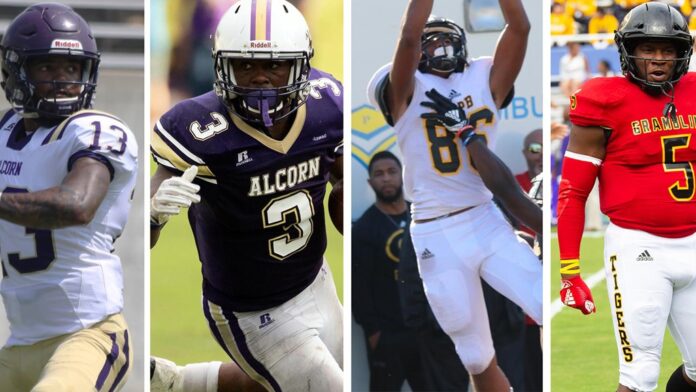 BIRMINGHAM, Ala. –  The Southwestern Athletic Conference released its 2018 All-Conference Teams on Thursday with 12 players from the SWAC East Division champions Alcorn State being tabbed for the most individual honors.

The teams were announced two days before the 2018 Toyota SWAC Football Championship at Jack Spinks-Marino Casem Stadium on the campus of Alcorn State University in Lorman, Miss. after ballots were cast by the league’s head coaches and sports information directors.

Forty-eight players were named to this year’s All-Conference teams. Players were ranked in their position based upon the number of votes received.  Ballots required voters to rank their selections in order.

After helping lead the Braves to a conference-best eight-win season, Alcorn State quarterback Noah Johnson was the voters’ choice for the SWAC Offensive Player of the Year award.  Following up on his Preseason All-SWAC First team nod, Johnson delivered as the redshirt junior completed a conference-best 63.4 percent of his passes (168-of-265) and threw for 1,944 yards with 15 touchdowns against eight interceptions.  The Tampa, Fla. native also held the top passing efficiency with a rating of 137.7.

Additionally, Johnson thrived as a dual-threat by accounting for the fifth highest total of rushing yards in the conference with 813 yards on the ground and seven touchdowns.  He was second in the SWAC in total yards of offense with 2,757.

De’Arius Christmas was tabbed as the SWAC Defensive Player of the Year for a second consecutive season after he racked up 55 tackles, 11 tackles for a loss, 5.5 sacks, two interceptions with one returned for a touchdown and two forced fumbles.  The senior linebacker from Vicksburg, Miss. also recorded seven quarterback hits and blocked a kick on the season.

Alcorn State redshirt junior transfer De’Shawn Waller was named the SWAC Newcomer of the Year after the running back ranked fourth in the conference in rushing yards with 871 and was also tied for second in the SWAC in rushing touchdowns with nine and was ranked second in average rushing yards per contest with 108.9.  The Atlanta, Ga. native had transferred from Hutchinson Community College in the offseason.

Arkansas-Pine Bluff wide receiver Dejuan Miller was named the SWAC Freshman of the Year after ranking tied for first in the conference in receptions with 56, third in receiving yardage with 801, and was tied for second in receiving touchdowns with six.  The Belle Glade, Fla., native was also third in receiving yards per game with 72.8 and was second in receptions per contest with 5.1.  During one stretch, Miller eclipsed the 100-yard receiving mark three consecutive weeks and recorded a season-high ten catches for 142 yards and two touchdowns versus Grambling State on Oct. 27.

Fred McNair was dubbed the SWAC Coach of the Year after leading the Braves to a fifth straight SWAC East Division crown.  Alcorn State was first in points allowed per game (20.6), boosted the conference’s best run-stopping defense (allowed 93.2 yards per game), tied for second most interceptions (12), most sacks (45) and limited opponents to the least amount of first downs per game (15.9).  On offense, Alcorn State was ranked second in the conference in points per game (33.2), first in total average yards of offense (471.3) and was first in rushing yards per game (274.3).

Prairie View A&M had the second most total amount of selections on the teams with nine (seven on Second Team), Arkansas-Pine Bluff followed with seven selections (five on First Team) while Alabama A&M and Alabama State each had five choices apiece named to the teams.  The Bulldogs had two players named to First Team, and the Hornets had one player honored with a First Team slot.

Grambling State had five student-athletes chosen to the teams including two on First Team.  Southern, Texas Southern, Mississippi Valley State, and Jackson State all had two selections each with one First team player apiece.

There were two players who received multiple team selections in kicker/punter Jamie Gillan (Arkansas-Pine Bluff) and Mississippi Valley State wide receiver/return specialist Booker Chambers.  Gillan was voted on as both the First Team kicker and punter while Chambers was named to the First Team as a return specialist and was awarded Second Team honors in the wide receiver position.