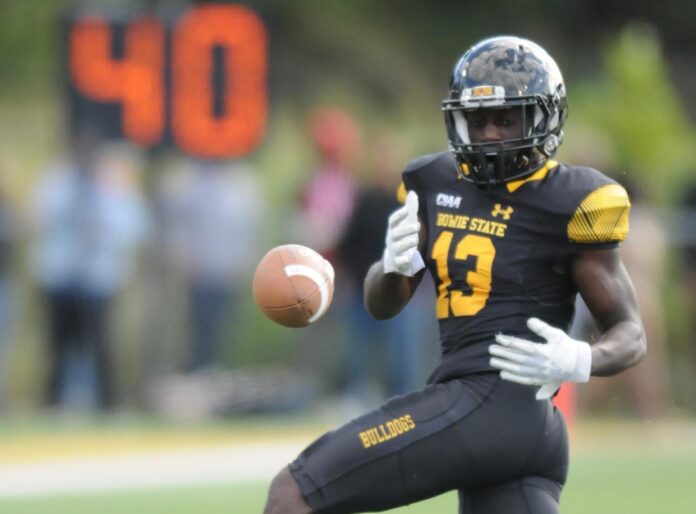 Bowie State got on the board first on an Amir Hall to Maurice Williams for 7-yard pass, catch and score at the 8:39 of the first quarter and Gene Carson PAT was good to give Bulldogs the early 7-0 lead.

The Bulldogs defense holds Valdosta on its second drive of the game and capitalizes with a 12-play, 54-yard drive capped off by a 32-yard Carson field goal to give Bowie State 10-0 lead at 13:36 mark of second quarter.

Valdosta State (11-0) answered quickly with a 73 kickoff return by Seth McGill down to the Bowie State 15-yard line. VSU’s Jamar Thompkins found the Bulldogs end zone, cutting the deficit to 10-7. Valdosta State’s Stephen Denmark picked off a Hall pass at the BSU 28-yard line and returned it for six to shift the advantage over to the Blazers at 14-10 with 12:51 left in the second quarter.

A Rogan Wells 5-yard rushing touchdown and PAT pushes Valdosta State lead to 21-10 over Bowie State with 4:04 left before halftime.

Hall connected with Lansana Sesay for a 72-yard touchdown pass trimming Bowie State’s deficit to 21-16 with 2:42 left in the 2nd quarter.

Bowie State and Valdosta State went into halftime with 222 and 215 yards of total offense respectively. The most glaring first-half stat for Valdosta’s Blazers were 114 yards in kickoff returns and possession time of 18:35.

Valdosta State scores on the opening drive of the second half when Wells finds Brian Saunds in the back of the end zone for a 4-yard score. Andrew Gray’s extra point was good to set the score at 28-16 at the 9:09 mark. A 27-yard Valdosta State field goal by Gray extends the Blazers lead to 31-16 with 4:55 left in the third quarter. Another huge play for the Blazers as Wells hits Lio’undre Gallimore for a 33-yard score to give Valdosta State a 38-16 cushion with 3:30 left in the quarter.

The Blazers added seven more points on the Bazemore-Hyder scoreboard with 13:05 to go in the contest following a 12-yard McGill rushing touchdown for the 45-16 advantage. Ivory Durham threw a 38 bomb to Michael Henderson to pad Valdosta’s lead at 52-16. Valdosta State was not done as Ivory drilled a 10-yard TD pass to David White to increase the Blazers lead to 59-16. Valdosta was not done as Ivory basically walked into the end zone with 42.3 seconds to go in the contest to account for the final margin of 66-16.