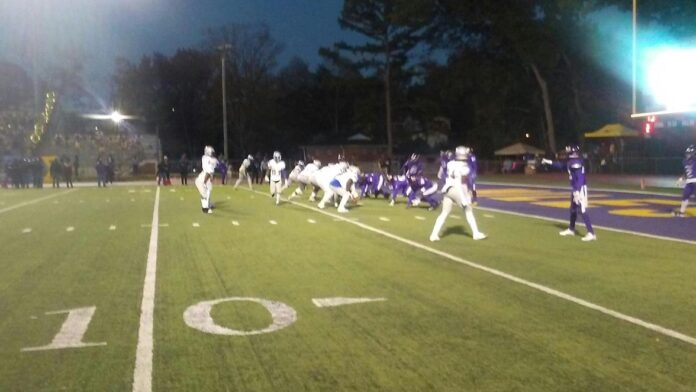 Playing on their home field, the Golden Bears defended their turf and avenged the 30-24 setback they suffered week 5 at Albany, Georgia. With the victory, Miles snaps the Rams’ win streak at seven games and wraps the 2018 season at 5-6 overall.

The Golden Bears offense was clicking on all cylinders as they scored on each of their four first half possessions. Miles finished the day with 480 yards of total offense including 238 yards though the air courtesy of quarterback Daniel Smith. Smith connected on 21 of 32 attempts and had two passing touchdowns.

Kelias Williams ended the game as the Rams’ top offensive performer with 107 yards on 14 carries and a rushing score. Defensively ASU’s Antonio Leroy led all performers with a game high 15 tackles.

Miles College got on the scoreboard first when they took the game’s opening drive 75 yards and Justin Hardy crossed the goal line with a 10-yard carry for an early 7-0 lead. The Golden Rams responded with a 7-play, 63-yard drive and knotted the game at 7 apiece when Williams called his own number on a 5-yard rushing score.

On Miles’ next offensive set, Jackson Spradlin put the Golden Bears back in front with a 26-yard field goal with 2:49 left in the opening quarter. They pushed their lead to 17-7 with Hardy’s second rushing touchdown, a 2-yard carry with 6:38 left in the first half.

On the next possession, the Golden Rams used three big runs to reach the end zone for their second score of the afternoon. Williams’ 37-yard carry was bookended by rushes of 24 and 14 yards by Kelan Fraise. The latter pulled the Rams within a field goal, 17-14 at the 6:20 mark.

The teams then exchanged field goals to wrap the first half scoring; Spradlin with a 43-yarder followed by a 38-yard conversion by Gabriel Ballinas with one second left in the half.

Leading 20-17 at the intermission, the Golden Bear offense capitalized on critical ASU miscues to score 23 unanswered to begin the second half. Smith put up his two passing touchdowns of the game in the third quarter; the first came after Joseph Cambridge forced the game’s first turnover, intercepting a Williams pass deep in ASU territory. Five plays later, Smith connected with DeionTray Fagin on an 11-yard strike and with the a converted PAT the Golden Bears held a 27-17 lead at the 11:07 mark.

ASU’s ensuing drive also yielded a turnover, this time a fumble recovered by the Bears’ Jaylun Thomas at their own 32-yard line. Miles then used a 9-play, 68-yard drive which ended with another TD reception by Fagin this time from 2 yards out and the Golden Bears extended their lead to 34-17.

Miles’ next offensive drive straddled the third and fourth quarters and ended with a 33-yard Spradlin field goal with 13:17 left in the game.

On the following ASU kickoff return, another fumble was again recovered by the Golden Bears, this time at the Golden Rams’ 28. Five plays later, Miles’ Justin Hardy ran it in from 10-yards out (extra point failed) for a 43-17 advantage.

After being held scoreless for the entirety of the third stanza, the Golden Rams only score of the second half came when Brandon Pearson found Javon Wooten with a 20-yard touchdown pass with 6:28 to go.

The Bears orchestrated 7-play fourth quarter drive that consumed just over four minutes and ended with a 9-yard score with 2:10 remaining for the final point spread.