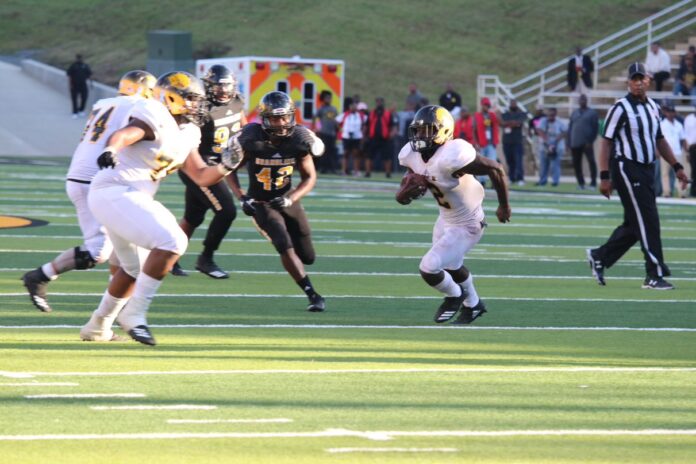 Offensive
Arkansas-Pine Bluff
Taeyler Porter (JR, RB, Immokalee, Fla.)
Junior running back Taeyler Porter finished with a career-high 226 rushing yards on 38 carries and added three touchdowns including a 75-yard touchdown run and averaged 5.9 yards per carry.  Porter entered the game just one yard shy of the SWAC rushing leader and is now has overtaken the lead in the conference with 1,037 yards and nine rushing touchdowns.


Defensive
Alcorn State
Brelion Hollis (JR, LB, Monroe, La.)
Hollis turned in a career day for the Braves. He wrapped up a career-high 12 tackles to go along with a sack and a pair of tackles for a loss. Alcorn ranks first in the nation in both sacks and tackles for a loss per game, and Hollis will help improve the team’s tally as it sacked Jalen Morton five times and brought PVAMU down 11 times behind the line of scrimmage. Hollis’ previous career-high in tackles was eight set last year at Jackson State. Hollis helped the Braves defeat the Panthers 27-13 which put them in the driver’s seat in the SWAC East Division. Hollis also aided Alcorn in holding the league’s then leading rusher, Dawonya Tucker, to just 60 yards.

Specialist
Southern
Cesar Barajas (SO, P, Arcadia, Fla.)
Barajas continued to set the tone for Southern’s special teams Saturday averaging 47.5 yard per punt on six punts. Two of Barajas’ landed inside the 20-yard line and the true sophomore posted a long of 60 yards as the Jaguars earned a 41-7 victory against Jackson State. On the season, Barajas ranked third in the conference in yards per punt at 41.7 yards per kick.

Newcomer
Alabama A&M
Nathaniel Dell (FR, WR, Daytona Beach, Fla.)
Playing in his third collegiate game (because of an injury in early September), Dell caught six passes for 204 yards and two touchdowns. The freshman caught a 26-yard touchdown in the second quarter that gave AAMU a 7-0 lead, and caught a short pass in the fourth quarter and sprinted 81 yards down the sideline for a touchdown that gave AAMU a 20-10 lead. AAMU defeated ALST 27-10 in the 77th annual Magic City Classic in front of over 65,000 fans at Legion Field in Birmingham, Ala.