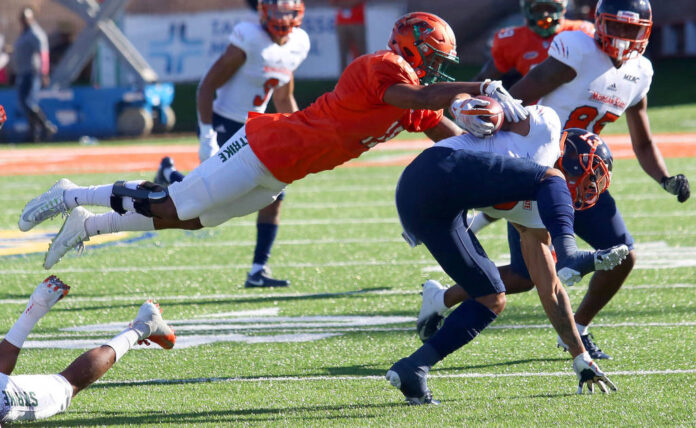 TALLAHASSEE, Fla. – The FAMU Football team continued its’ quest “To Win Now,” Saturday, as they came off a bye week and routed the visiting Morgan State (Md.) University Bears, 38-3, in a Mid-Eastern Athletic contest at Bragg Memorial Stadium Saturday evening.

Saturday’s win helped the Rattlers achieve a number of milestone with three games left in the 2018 campaign, standards which included:


– Extending their winning streak to five games – the longest in since 1999 (11 straight).

– Improved to 5-0 in MEAC play, with only one title contender left on the schedule (Howard University next week in Washington, D.C.).

– The victory reduced the Rattlers’ magic number – the number of conference wins needed to clinch their first undisputed title since 2001 – to one (1).

For those fans who may have wondered if the bye week would have promoted rust on their beloved Rattlers, the first half proved those fears groundless, playing out much like the North Carolina Central game, when FAMU built a huge early lead and never looked back.

FAMU’s defense, which has come up big all season, scored the team’s first points for the second straight game, as defensive tackle DeMontre Moore pounced on a Morgan State fumble in the end zone for a touchdown and 7-0 lead with 11:13 left in the opening quarter.

Junior QB Ryan Stanley then directed a six-play, 85-yard scoring march on the Rattlers’ second possession of the game, capping the drive with a 22-yard scoring toss to Chad Hunter with 4:53 left in the period, extending the Rattlers’ edge to 14-0.

FAMU made it 17-0 just into the second period when kicker Yahia Aly booted a 47-yard field goal with 14:41 left in the half.

Stanley then pushed the Rattlers farther ahead before halftime, tossing scoring strikes of 15 yards to Marcus Williams (3:11 left), and 21 yards to Xavier Smith (1:17 left) to give his club a 31-0 halftime lead.

Junior RB Deshawn Smith, who rushed for a team-high 116 yards on 14 carries, scored the Rattlers’ final touchdown with 5:10 left in the third period, on a six-yard run, which saw left run left, then reverse field, beating the Morgan defense to the end zone.