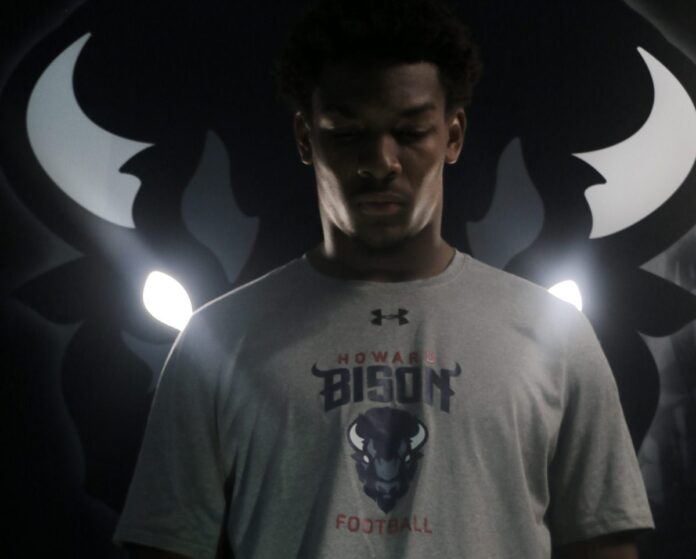 Tucked away in what can only be described as an underground labyrinth within Howard University’s Burr Gymnasium, the Bison football team could be heard preparing to bring their afternoon practice to an end. Their booming voices bounced from wall to wall as I made my way down the dimly lit hall toward the teams newly renovated locker room. I could almost feel the team’s energy from beyond the double doors; the Bison recently brought home a win against Bethune Cookman and were set to challenge North Carolina Central at the start of October.

In a matter of seconds, the hall was flooded with this year’s roster of football players. Despite a grueling afternoon of running drills and strength training, the young athletes maintained a consistent level of intensity I’d first recognized while covering one of their OTA’s in the Spring. After undergoing a change in team leadership last season the Howard Bison quickly found their stride, earning a total of 7 wins out of 11 games.

The team started last season off with an explosive upset against UNLV, shedding their underdog title for that of “champion.” The young man that helped his team attain its first of many wins for the season was Caylin Newton.

Newton claimed a total of 330 offensive yards and three touchdowns, ultimately garnering himself, as well as his team, a wave exposure from the press, including ESPN, USA Today, and the Washington Post.

After a few weeks of scheduling conflicts, I finally had the opportunity to catch up with Newton. Standing at a solid 6ft, Newton loomed over his oakwood cubby as he finished up a conversation with one of the team’s student assistants.

Once the interview started, I was curious to know Newton’s thoughts on the current season. What would he have to say about his team’s performance over the last three games?

Unlike last years impressive opening, the Howard Bison are combating a rough start to the 2018 season. “Obviously we had two tough losses from FBS (Football Bowl Subdivision) schools,” Newton told me. “We competed against Ohio and Kent State – pretty much got it handed to us, but it was a wakeup call.”

Howard University’s third game of the season, a matchup against Savannah State, was canceled in the wake of Hurricane Florence. However, the last minute cancellation presented the team with an unexpected benefit- recovery time. “We were going to play against Savannah State, and it was postponed. We had that extra week before Bethune Cookman to get our bodies back, and we were fresh. We won that game,” said Newton.

It became clear to me while speaking to Newton that he, despite his age, possessed a level of maturity and emotional control that some players nearly twice his age still strive to attain. Even as he discussed his team’s early losses, Newton maintained an air of pragmatism, walking through the personal steps he was taking to aid in his team success moving forward.

“Last season, of course, we shocked a lot of people by winning that first game, but I think there were a lot of games that we should’ve won,” he said. “I think maturity on my part played a role in that as far as being a leader on the field this year I definitely feel more confident.”

Given the amount of time that Newton and his team must devote to football, whether it be due to practice, travel, conditioning, etc., it was essential to understand whether or not he’d found a balance between being a student and an athlete as of yet. The NCAA states that all Division 1 athletes are required to hit certain academic benchmarks, also known as progress-toward-degree requirements, to remain eligible to play.

Newton maintains just as much focus in the classroom as he does on the football field, balancing a full-time course load with an equally demanding football schedule. “I’ll meet with the coaches, watch film, and prepare for the next appointment,” said Newton. “Balancing workouts and homework, resting my body when I need to. For me, it’s just all about being productive.”

With constant productivity being one of Newton’s most important personal objectives, it begs the question: how does he maintain a social life?

“For me my social life is sleep,” Newton stated. “I don’t really think about going out. I’m more so busy thinking about how many hours I put in at the gym or reviewing game footage with the coaches. I feel like for me maturing and being more consistent as far as staying focused; I’m just in a serious locked in phase.”

This 20-year-old athlete seems to have it all figured out, but then again Newton has always had excellent examples in the form of his older brothers, Cam and Cecil Jr., as well as his father Cecil Sr., who he states are all pivotal to his current success.

“I had two older brothers to look up to,” he said. “I went to high school and felt like I knew what to expect because of them. I went to college, and it was the same thing. I had Cecil and Cam to look up to so I always felt like I had a blueprint on how to do things the right way.”

And when the time came for Newton to decide as to where he would play football, Cam looked to his father and older brothers for guidance. That guidance ultimately pointed him in the direction of Howard University.

“I’ve always been aware of HBCU’s. My father went to an HBCU, Savannah State,” Newton said to me. “My oldest brother Cecil Jr. went to Tennessee State University.”

And while his second oldest brother, Cameron Newton, opted to play for the University of Florida, Caylin picked up the torch and continued the family legacy. On January 5th, 2017 the Atlanta native made waves on social media by announcing that he would be taking his talent to Howard University, also known as the Mecca.

“My dad told me to do some research so I looked up Howard,” Newton said. “I looked into the school and the football team. It came down to what was the best choice for me.” Newton’s decision paid off. Since joining the team, the young sports star has earned a total of 927 yards, 13 touchdowns, and has yet to miss a scheduled game with his team.

Newton’s transition from high school to college, however, was not an easy one. “It was a challenge with my first semester being a high school student and my second semester being in college,” he said. “Howard is a family environment so you’ll never be on your own, so I relied on help.” And while the experience was a bit surreal for Newton, in the beginning, he soon found his footing as a college student.

“I went to class, and I’m just like ‘Man I’m in a college class,’ but for me, I felt like it was time,” Newton said. “Cam did it back in his day. I wanted to do the same thing, and I knew I was ready for the next level.”

Newton’s strong will and determination saw him through his first semester at Howard University, and that grit continues to allow him to maintain his momentous ascension to the top of college football.

“I always look back on the Spring semester when I first started, and I was third string. Every day was a struggle mentally and physically, but I’d always tell myself to keep going,’ he said. Naturally, you get frustrated. You’re dealing with rough days and hard times, but you’ve got to keep going. Eventually, something good will happen.”

Newton is only in his second year at Howard University, however, through conversation it becomes apparent that he has a firm grasp on the world around him, as well as the power that he has to incite change.

“I feel like I have a purpose in life,” he stated. “It’s not really a doctor or a police officer, or any specific job. What I do know is that I want to use my platform and my influence for good. I think that’s what everyone should do. Use your voice and your platform incite change.”

And if his awareness of the world around him doesn’t make this young man a stand out individual already, his work ethic does. Rather than spend his first college summer at home celebrating the fruits of he and his team’s hard work, Caylin decided to intern at Under Armour. “I spent the summer at Under Armour, and that was really important to me,’ he said. “My family would always remind me that football is just for a time period. Working with UA and seeing how a business is a run was invaluable.”

“I got a chance to see Adrienne Lofton when she was with UA,” he said. “I would just watch her in meetings and I would see a powerful black woman control a room. It was something to see and a blessing to experience.”

As our interview came to a close, I found myself inspired by Newton’s hunger, not just for success, but for happiness. He never once allowed the dialogue to rest solely on his achievements but instead highlighted the fact that everything he’s accomplished thus far wouldn’t be possible without the support and guidance of his family, his coaches, and his team. Newton’s star is only destined to shine brighter, and as he matriculates through Howard University, he will ultimately be faced with a decision every college student must ask themselves in the end; what next?

“My number one goal is to graduate. I came here to get a degree, and that’s number one,” Newton said. “I think everything else will take care of itself.” With Newton’s undeniable talent for football accompanied by genuine humility and natural charisma, the sky is truly the limit for this young man.