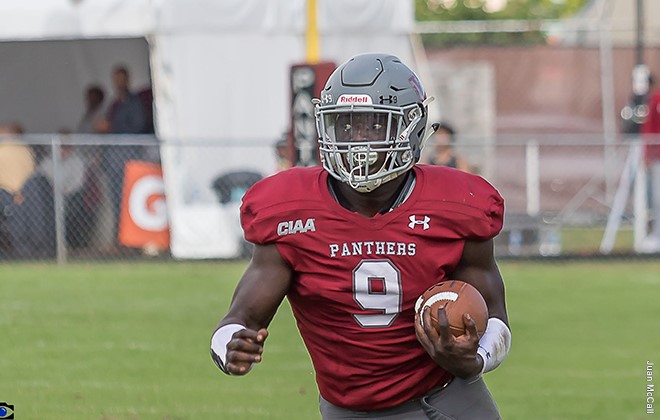 In front of a homecoming crowd, the Panthers recorded the most points of any Virginia Union team in a game since a 1916 contest against Saint Paul’s College. The blowout victory showcased the Panthers’ talent and depth on offense, defense and special teams. Nine different Panthers scored TDs.

The Panthers racked up a school-record 494 yards rushing, bettering the record of 490 set against Virginia State University in 2009, the nine rushing touchdowns bettered the old record of eight set against Saint Paul’s in 1950, and the previous record of 11 total touchdowns set against Lincoln in 2014.

“When you play as a unit, you will see success in all three phases of the game,” first-year Union coach Dr. Alvin Parker said. “It was nice to see so many different guys make plays today. I appreciate the hunger of the whole team.”

While the Panthers used the game as an opportunity to give reserve players a chance to see action, it was the usual team leaders that set the tone.

The Panthers’ leading rusher, Hopewell graduate Tabyus Taylor, found the end zone first on a 4-yard run in the first quarter. Taylor churned out 235 yards — 25 shy of the school record — and scored three touchdowns on 23 carries. Top return man Jaiden Reavis (Highland Springs) returned a punt 45 yards for a TD, his second special teams touchdown in two weeks, and caught a 39-yard TD pass from Darius Taylor in the first half. Darius Taylor scored the team’s other first-half touchdown on a 21-yard scramble in the second quarter.

The second half featured more outstanding play as the Panthers scored 28 points in the third quarter and 34 in the fourth. They finished with 673 yards.

“The whole week, Coach Parker has kept us away from a lot of the homecoming festivities to keep us focused on our goal of being 4-1,” Tabyus Taylor said. “From the starters to the last person on the bench, we all played a great game.”

The Panthers also played their most complete defensive game of the season. Lincoln was held to 47 rushing yards and nine first downs. Union forced 11 punts, three turnover on downs and five fumbles. More than 20 players recorded at least one tackle. Sterling Hammond had the defensive highlight of the day when he scooped up a fumble, stiff-armed the would-be tackler and ran 26 yards for a touchdown on the first drive of the second half.

“The coaches emphasized being around the ball on defense all week,” said Hammond who is the first Panther to have multiple fumble recoveries (two) in a game since 2010. “Our main goal was to just stay focused on our opponent, and during this busy homecoming week, we did that.”

Virginia Union’s 90-point victory over Lincoln solidifies it as a legitimate contender for the CIAA championship.

“Our goal is to perform on the national level, but we have to win the division and the [CIAA] championship game first,” Parker said. “I’m proud of the guys and how everyone got a chance to contribute to the win.”