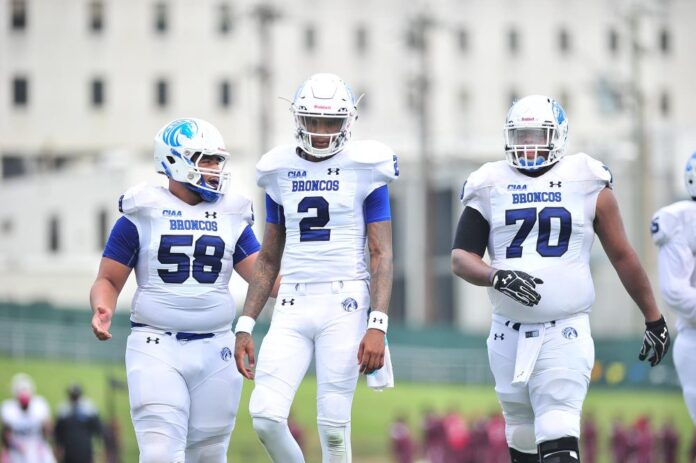 Durham, NC – Fayetteville State’s Collyn Anderson returned to his hometown of Durham and once again lit up the skies with 269 passing yards in the Broncos 29-16 victory over Shaw University at the Durham County Memorial Stadium. FSU led 23-6 at intermission.

Anderson, who played high school football at Hillside High School, was 17-of-24 passing with no interceptions and only one sack. He threw two touchdowns with his longest pass landing in the hands of Darnell Walker, who scrambled for 64 yards.


Fayetteville State improves to 3-1 overall and 2-0 in conference play. Shaw is now 1-4 and 0-2. FSU finished with 457 yards of total offense with 188 yards rushing to accompany the 269 passing yards.

The Broncos immediately struck paydirt in the first five minutes of the game when Anderson connected with Christopher Brooks for 37 yards. The ten-play drive for 77 yards gave FSU a 6-0 lead as the extra point kick was missed.

Before the end of the first quarter, Shaw tied the game (6-6) after driving half the field and scoring on a 10-yard pass from Keon Marsh to Marquis Gorham. Tony White blocked the extra point kick that later found itself in the hands of Alex Woods, who was stopped from scoring defensive points.

David Lamb redeemed himself for the missed PAT with a 32-yard field goal to give the Broncos a 9-6 edge with 10:06 remaining in the half.

Darnell Walker bulldozed his way into the end zone for a one-yard touchdown with 3:01 left in the half to cap a 14-play 74-yard drive.

The Shaw Bears’ defense scored a touchdown in the fourth quarter when Thurman Trapp blocked Jacob Young’s punt in the end zone. Sean Snowden recovered the ball for the touchdown.

Beni Kinsemi added three points to the Bears score with a 34-yard field goal to help the Bears to a 23-16 deficit.
Fayetteville State responded with the final touchdown of the game on the pursuing drive with a one-yard punch-in by fullback James Transou.

Stevie Green finished the game with 26 carries for 143 yards. He surpassed the 100-yard rushing mark for the third time this season.