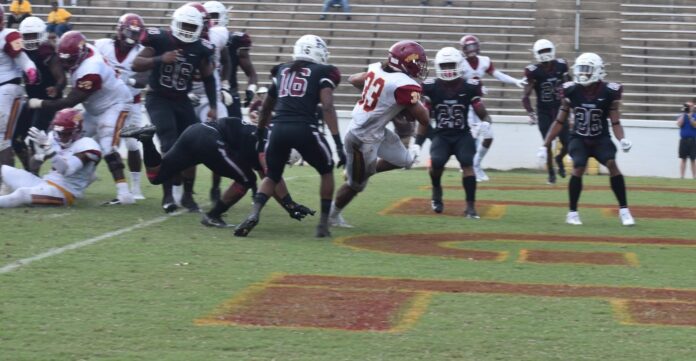 TU got on the board first when kicker Huskic Arnes capped off a nine-play 84-yard drive with a 28-yard field goal, making the score 3-0 with 7:42 left to play in the first quarter. MHC answered the call on its ensuing drive with 10-play 56 yard drive that ended with a Fernando Sdelam field goal that tied the game near the end of the first quarter at 3-3.

The most interesting scenario of the first half came after a Morehouse red zone offside penalty on 4th down while TU attempted a field, the infraction put Skegee closer, which led to the decision to go for it. On the very next play, Justice Owens punched in a 2-yard run at the 12:33 mark of the second quarter to increase TU’s lead, 10-3. The Maroon Tigers would again respond when Santo Dunn scored on a 42-yard run with 4:29 left to play in the first half.

TU running back Taurean Taylor led Skegee’s rushing attack with a career-high 90 yards on 10 carries. Steven Hodges hauled in five passes for a season high 66 yards. The Golden Tigers wasted very little time breaking the tied game after scoring on its opening possession of the second half. Owens, the game’s MVP for TU scored his second touchdown of the game from two yards out, capping off a 9-play 62 yard drive 4:25 into the half. He also caught a pair of passes for 57 yards.

On fourth in goal with 1:33 left to play in the game, MHC scored on a halfback pass when Frank Bailey found Tramell Gooden in the back of the end zone to tie things at 17-17 forcing overtime.

Both teams missed a pair of field goals in the first overtime. In overtime number two, Javvarius Cheatham scored on a 10-yard end around reverse. After the PAT, TU led 24-17. Dunn would respond for the Maroon Tigers with a 16-yard touchdown run, which tied the game 24-24.

Dunn secured his MVP status with his third touchdown of the game in triple overtime, scoring on a 14-yard run for MHC. TU was stopped on and 4th and short during its possession in the third overtime, which handed the Golden Tigers its third loss of the season.

Winners of its last 20-of-25 Classics, TU suffered its first defeat in this game since 2010. Tuskegee will stay on the road next Saturday as they travel to Fort Valley State. Kickoff is set for 5 p.m. ET. Live coverage on the Tuskegee Digital Network starts at 4:55 p.m.