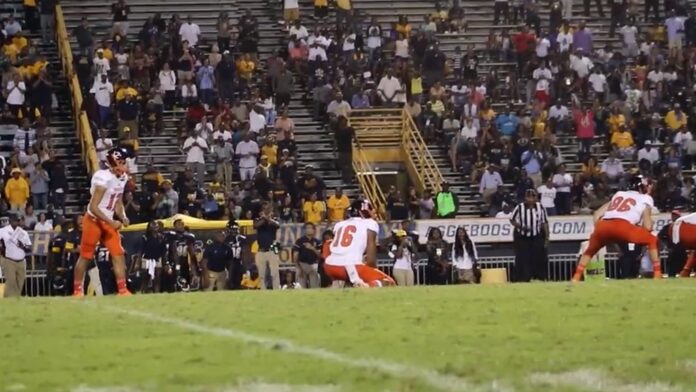 When Alex Raya connected on a 36-yard field goal as regulation ended to give Morgan State an improbable 16-13 upset win over No. 4 North Carolina A&T Saturday, the Aggies FCS-best 15-game winning streak wasn’t the only thing that ended.

While North Carolina A&T, the defending Black College Football national champions, can still win the MEAC and Celebration Bowl for the third time in four seasons, gone is its cloak of invincibility and, more importantly, national luster for its program and HBCU football in general.


It wasn’t that the Aggies lost. Every team, regardless of how good they might be, has the potential to lose. It was North Carolina A&T going down to an unranked Morgan State outfit that had dropped its first three regular season games by an average of 21 points per outing that is most devastating.

Irrespective of how accomplished the Aggies have been during this current run of excellence and achievement, there seemed to always be this sense that they had to be twice as good to earn the same reverence as the more established FCS cohorts because fairly —  or not —the MEAC isn’t regarded on equal footing.

The defeat only confirms all the stereotypes of HBCU Division I leagues have about teams only being good within the confines of their respective conferences, especially by those who’ve scoffed at the notion this North Carolina A&T group — a likely non-playoff participant— should quailfy as the best in the country over recent national championship winners.

Will another HBCU team with similar credentials as the Aggies be marginalized by voters because of what transpired on a random Saturday night in North Carolina?

It remains to be determined how far the Aggies will fall in the latest FCS top 25 poll. But no matter where they land, the Bears pulling off one of the biggest upsets in recent memory likely did damage that will impact HBCU football playing schools at this level for years to come.