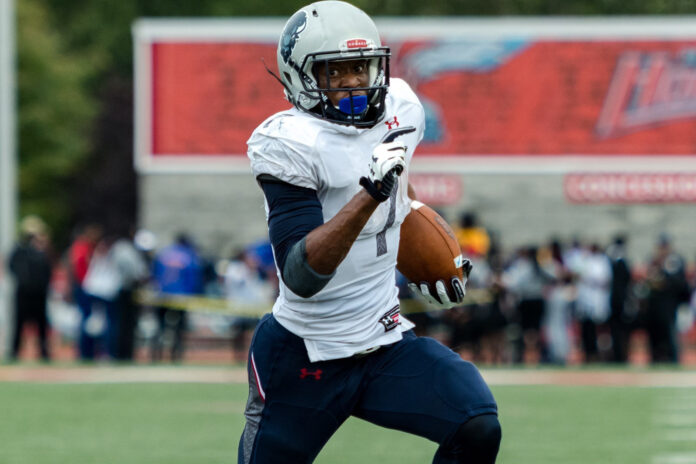 Most of the offseason has been spent forecasting what the beginning of the regular season will look like by analyzing these aspects of each unique season.

The players who might make the most impact are a routine staple.


The first-year coaches who could either continue a program’s progress or stunt it over a four-month period is another.

And the early season contests that pose as a barometer to how the rest of the year could potentially unfold.

Over the next 111 days, there will be pivotal games that ultimately decide which teams participate in the Celebration Bowl in Atlanta.

They will be conference games. They will be division games. And they, too, be games that no one expects has any championship implications on the line.

Today, we’ll examine some of the games that will lead up to a the Celebration Bowl matchup…

Grambling State vs. Alcorn State (Dec. 1) — SWAC Championship Game: Grambling State hasn’t lost a conference game in the last 26 outings. Want to take a crack at guessing the last squad to knock off the Tigers? That’s right, Alcorn State in the 2015 SWAC Championship Game. Though Grambling has gotten the better of the Braves, winning four of the last five meetings since 2014, three of them (2014, 2015 and 2017) were decided by a possession, including last season’s conference title game that went down to the wire. Both schools were again picked to win their respective divisions, as clearly being the two best outfits in the league. When all is said and done, these particular teams — in this particular game — will have a lot to play for.

Grambling State vs. Southern (Nov. 24) — Bayou Classic: Historically, this game not only has decided braggin’ rights, but the SWAC West Division and a trip to the conference championship game. Now, this rivalry presents so much more meaning with a potential chance for one of the teams to play in a postseason game, too. Grambling has won the last three, and none of outcomes have been close. The Tigers have been victorious by an average of 14.6 points per game since 2015. Still, Southern boasts an impressive 13-2 record in league play over the last two seasons. With both programs seemingly near their peaks heading into 2018, the most recent edition of the Bayou Classic could decide the next Black College Football champion.

North Carolina Central vs. Howard (Oct. 27): Just two years ago, before Mike London arrived to revamp the program, no one ever could have imagined Howard as a possible MEAC contender — let alone — national championship caliber team. But here we are after the Bison pulled off one of the biggest upsets in college football history on its way to winning seven games ago. That’s why if Howard — is the team most figure they will be in 2018 — its game versus North Carolina Central should impact the MEAC race and beyond. The Eagles won’t drop off much, though Granville Eastman will be at the helm as a first-year head coach in place of Jerry Mack, who is now the offensive coordinator at Rice. If North Carolina Central can get any sort of consistent offense, this one has all the makings of being a classic.

North Carolina A&T vs. North Carolina Central (Nov. 17): For several seasons, this has been the de facto MEAC championship game, with one of two teams moving on to the FCS playoffs or the Celebration Bowl. The Aggies were near consensus favorites to win the league title in 2018 coming off an unbeaten season and Black College Football crown. Despite the Aggies being overwhelming favorites to repeat, nothing is ever guaranteed in rivalry games … especially those with stakes at hand and the opposite sideline features nine All-MEAC selections.

Howard vs. South Carolina State (Oct. 27): By every measurement, South Carolina State wasn’t very good in 2017. It lost six MEAC games, one less than last-place Morgan State. The Bulldogs were picked to finished seventh in MEAC preseason poll. But South Carolina State has always carried the reputation of being a tough out. If Howard has any aspirations of keeping up in the MEAC, this is a sneaky opponent they can’t overlook.

North Carolina A&T vs. Bethune Cookman (Oct. 20):The closest anyone came to derailing the Aggies’ perfect season within the Black College Football world was Bethune-Cookman. The Wildcats went on the road and dropped a 24-20 nail-bitter last October. With this season’s game on Bethune-Cookman’s home turf, the Aggies might not leave Municipal Stadium unblemished.