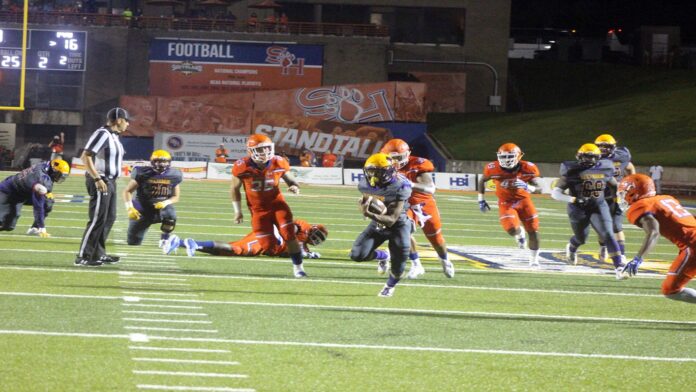 “I thought it was a hard-fought game,” said PVAMU head coach Eric Dooley. “Unfortunately we came up a little short. We just have to go back to the drawing board to correct some mistakes we had and get ready to face a good UNLV football team.”

The game was delayed approximately 35 minutes late in the first quarter due to lightning.

Tucker scored the first of his two touchdowns on a 14-yard run to take a 9-3 lead with just over seven minutes to play in the first quarter.

Following consecutive touchdowns by Sam Houston to put the Bearkats ahead 17-9, Prairie View A&M scored back-to-back touchdowns of its own. Jaylen Harris returned an interception 46 yards for a touchdown to cut the deficit to one. On the next offensive series, Tucker scored on a 25-yard run to put PVAMU ahead 23-17 with just over six minutes to play in the first half.

Sam Houston scored twice in the final 1:26 of the second quarter to take a 27-23 lead into halftime. After the Bearkats extended to a 34-23 lead in the third quarter, the Panthers made a fourth-quarter run.

Zach Elder’s 27-yard field goal cut the PVAMU deficit to 34-26 less than two minutes into the final period before the Panthers scored a touchdown on their next offensive possession. A six-play, 73-yard drive ended with a 40-yard scoring pass from Morton to Zarrian Holcombe with 9:04 remaining, but the two-point conversion try was ruled incomplete.

The Bearkats scored with just over a minute remaining for the final margin.

“I know that they are going to fight,” Dooley said of his teams’ effort and near-comeback. “I know they are going to lay it on the line. Unfortunately we had some things that didn’t go our way. That’s all a part of football. It’s growing pains right now, things we have to build off of, and continue to move forward.”

Prairie View A&M returns to action next Saturday at 9 p.m. CT. The game can be viewed online on the Mountain West Network. The Panther Sports Network radio broadcast begins with Countdown To Kickoff at 8:30 p.m. online at pvpanthers.com/sportsnetwork.