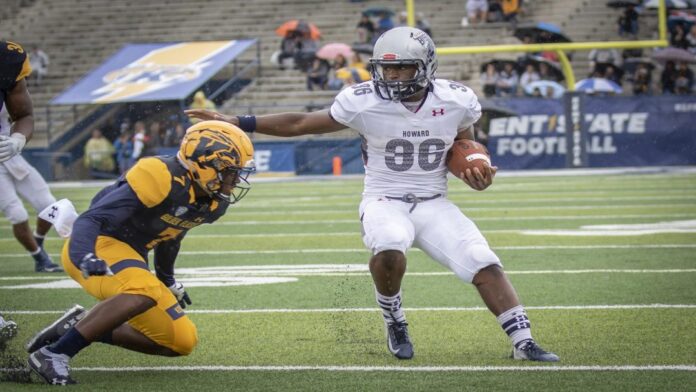 KENT, Ohio – After putting up an impressive 645 total yards at Ohio, Coach Mike London and the Howard University Football team were unable to find their rhythm as they fell to FBS foe Kent State (KSU), 54-14, for the second consecutive year.

Howard’s high-powered offense was held to only 270 total yards while the Flashes gained 511 total yards and averaged 6.3 yards-per-play.

“We got outcoached,” said Coach London after the game. “We got outplayed and we could not stop them. We could not convert. They were the best team today and it showed.”

After being shutout in the first half, Howard got on the board with a 6-yard touchdown pass from sophomore Caylin Newton (Atlanta) to third-year wideout Kyle Anthony (Miramar, Fla.), 26-7.

Late in the third, Newton found fellow classmate Dedrick Parson (Philadelphia) streaking down the sideline for a 74-yard touchdown pass and swung momentum back into HU’s favor, 33-14.

Kent State’s lighting fast offense kept the Bison’s defense off balance; thus, scoring another touchdown late in the third, followed by 16-yard TD run from KSU’s Will Matthews early in the fourth.

“We have a lot of work to do and things we must go look at again,” London expressed. “This football team today was not indicative of the one that played last week. They [Kent State] did what they had to do and we could not stop them.”

Parson had 138 all-purpose yards, including 107 receiving yards on four catches.

“There are a lot of guys that played in this game, including a lot of true freshman,” Coach London stated. “Towards the latter part of the game, they caused some turnovers and did some positive things. We just need to go back and look at what we do and how we do it. As I said, they outcoached us and outplayed us. We were not ready for the elements. There are a bunch of things that have to get corrected.”