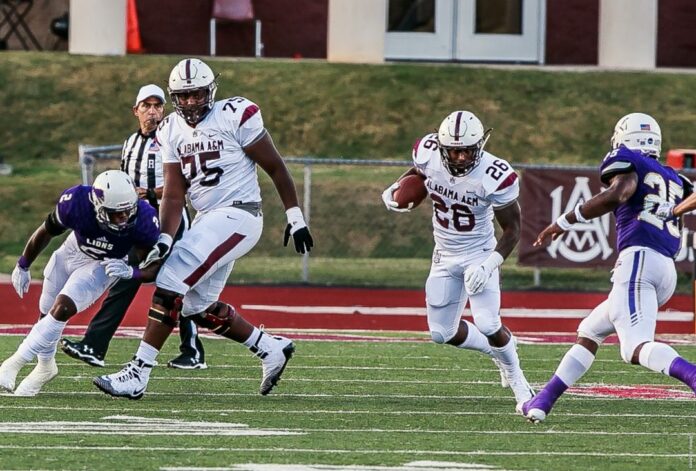 Trailing in the fourth quarter, Alabama A&M had two shots at rallying for a significant rivalry win.

A pair of turnovers ended the Bulldogs’ hopes.

“I’m proud of our football team,” Alabama A&M coach Connell Maynor. “Our guys played hard and gave us a chance to win. We settled down after a tough start early and fought until the end. This definitely is a game we can build on.”

And by the start of the fourth quarter, it appeared momentum was on the Bulldogs’ side.

Spencer Corey kicked his second field goal of the night, a 19-yarder, late in the third quarter to give Alabama A&M a 20-18 lead. After forcing UNA to punt, the Bulldogs had the ball and was driving into the Lions’ territory with a chance to extend the cushion to two possessions.

A turnover changed the momentum.

UNA (2-0) recovered a fumble and Lopez led the Lions on a scoring drive that ended with a 30-yard touchdown pass to Jakobi Byrd.

“Offensively, I thought we did a good job,” Maynor said. “Overall, we were able to do what we wanted. We were able to move the ball. A few things just didn’t go our way.”

Glass finished with 216 passing yards, completing 24 of 40 attempts with an interception.

The game marked the first time Alabama A&M and UNA played since 1997, and it was the 25th all-time meeting.

“I think this rivalry is great for both programs,” Maynor said. “We had a great crowd here tonight. They were into the game. I’m not sure why this game was stopped when it was, but moving forward, I think this is a rivalry that needs to be on the schedule when both teams can fit it on their schedules.”