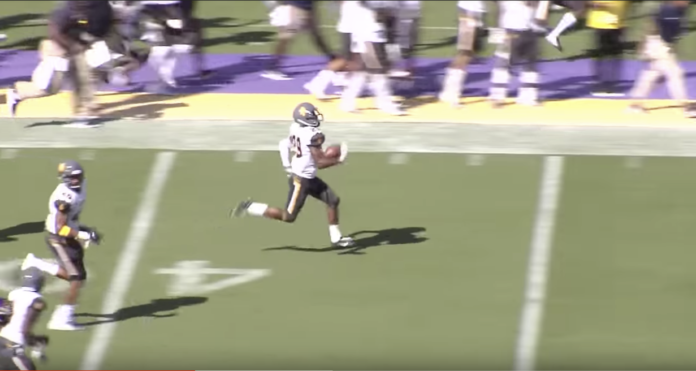 GREENVILLE, N.C. – It was supposed to be a typical FBS vs. FCS football game, in which the FBS team beats up on the lower-division FCS team, and the FCS team takes home a sweet bundle of cash for taking such a beat down.

But in the case of the North Carolina A&T Aggies, an FCS member, that situation is far from typical.

The Aggies slayed another FBS opponent for the third time in four attempts Saturday when they defeated East Carolina 28-23 at Dowdy-Ficklen Stadium.

A&T’s defense managed to give the Aggies (2-0) a 7-3 lead when Franklin McCain returned a 100-yard interception for a touchdown with 5:09 left in the first quarter.

East Carolina (0-1) scored 14 unanswered points in the second quarter to take a 17-7 lead before A&T quarterback Lamar Raynard connected on a 12-yard touchdown pass to Zachary Leslie to cut the Pirate’s down to three points, 17-14.

After a third quarter 35-yard Jake Varity field goal extended the Pirates’ lead to make the score 20-14, the Aggies took a 21-20 lead with 14:31 in the fourth quarter when Kylil Carter threw a 5-yard touchdown pass to Leslie.

The Pirates took the lead 23-21 for the final time on another Verity field gold before Carter found Eijah Bell in the end zone for a 17-yard touchdown pass that cemented the win for the Aggies.

In addition to extending a 13-game winning streak, the Aggies were paid $300,000 plus travel cost by East Carolina to play the game.