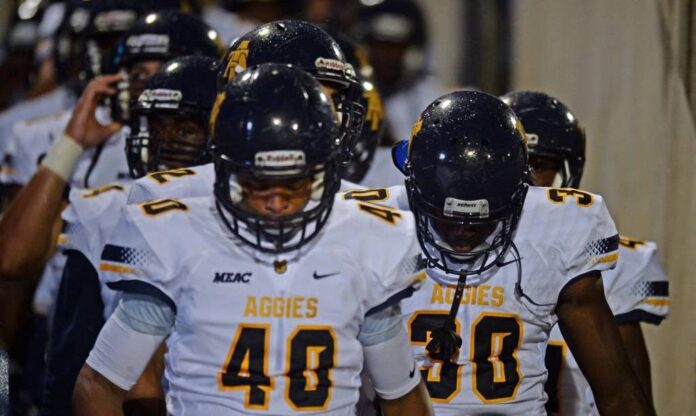 North Carolina A&T is likely the best team in the FCS after its win over sixth-ranked Jacksonville State Saturday night.

The Aggies 20-17 win over the Gamecocks was its 13th consecutive and second straight over a ranked FCS opponent.


Let’s consider this: over the last three seasons, the Aggies have won two Celebration Bowl games, two MEAC championships, a pair of Black National Championships and appeared in the FCS playoffs.

As a result of its most recent win, North Carolina A&T has beaten the two schools — Grambling State and Jacksonville State — that currently own Division 1 football’s longest conference winning streaks, at 26 and 31 games, respectively.

Oh, and North Carolina A&T has produced wins over FBS Kent State and Charlotte, too.

Few schools this side of North Dakota State have such an impressive resume.

That’s why North Carolina A&T starting the season ranked at No.14 in the preseason poll instead of inside the top 10 is baffling despite its undefeated 2017 campaign.

Well, not so much baffling when considering they’re being penalized for being part of an HBCU conference — one that historically hasn’t performed well against FBS opponents or in the FCS postseason, either.

That stigma of playing in that league against those opponents carries a lot of unfair weight when assessments are made by voters.

The only obvious argument to refute the idea that the Aggies aren’t the best team in the FCS is a lack of a national championship that isn’t tied to an association with Black College Football.

Still, North Carolina A&T is on par with the FCS elite. They’re 31-5 since 2015. In that same span, North Dakota State, winners of two of the last three national titles, is 39-5. James Madison, which has broken up the Bison dominance with a crown of its own, is 37-5.

Unlike most of the other top programs in the FCS, North Carolina A&T — as long as they win the MEAC — will never have an opportunity to compete for a national title because of the league’s contractual ties to the Celebration Bowl, which mandates the conference champion participate in the ESPN-backed creation.

But that truth should not take anything away from the eyeball test, which over the last 600 days, indicates the Aggies are the premier program in the FCS.