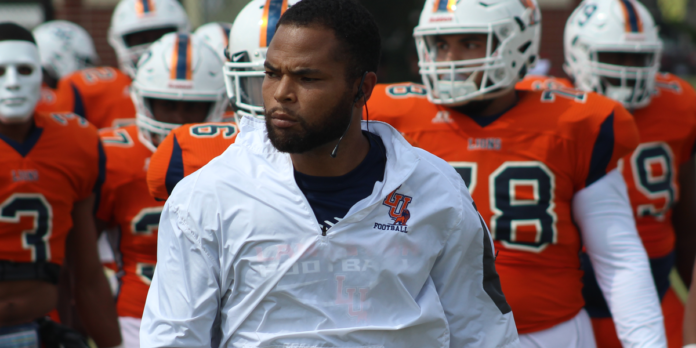 The Lions, who received seven first-place votes in the preseason coaches’ poll, will be led by several All-Americans, including senior quarterback Jaylen Lowe, who threw for 1,116 yards and 11 touchdowns last season.

“If it wasn’t from that start, I wouldn’t be where I am today,” said Morgan, who led the Lions to a program-record 31 wins and a trip to its first-ever Red River Athletic Conference postseason tournament during his three years as head coach. “I had to take the same leadership skills I learned from softball and bring them to football. It was the same type of work ethic.”

As a softball coach, his first head coaching job anywhere, Morgan was able to display and develop the leadership skills and foundation that has translated into the Lions football operation going an impressive 21-4 since 2015, including a 10-1 record in 2017.

HBCU Sports spoke with the 2018 HBCU Male Coach of the Year nominee about his prospects for the 2018 season and his rise to one of the best coaches in all of Black College Football.

HBCU Sports: How can Langston live up the lofty expectations going into 2018?

Morgan: “Usually when you have a target on your back, you have to come to work every day. The expectations are to win every day and not just on Saturdays. There has to be a lot of teamwork and team camaraderie and focus.”

HBCU Sports: How much does it mean for you as someone who played for the university, was an assistant to be the head coach at your alma mater that is expected to do so many great things?

Morgan: “It’s a blessing just to have this opportunity. I’m grateful for it and I strive every day to be the best I can be. It’s been like a dream come true to me.”

HBCU Sports: Since you’ve taken over as head coach, Langston has only lost four games. How have you been able to bring so much instant success to the program?

Morgan: “Just working hard. Just making sure you put the kids first and make sure the kids are treated well. I think the rest will handle itself. It’s just about putting the kids in a good environment where they can succeed in, and that’s what we try to do here.”

HBCUSports: When the interim tag was removed after that first season, was there anything about the culture of the program you had to change to get it moving in the direction where you envisioned it?

HBCU Sports: At what point do you think you gained the trust of your players after you took over?

Morgan: “I think I gained the trust of my players when I first took over in 2015. They saw a difference in my deliverance. They saw where I was trying to take the program and everybody bought in. And we ended up getting the program up to another level.”

HBCU Sports: At what point during this stretch of winning did you know the group was shaping up the way you wanted?

Morgan: “I knew by the end of fall camp last year. We were humbled a hungry. The humble kids, but they were hungry for more and to be better at their craft. When you have kids who are like that, success just happens. To see them grow from previous losses, I could see that I had a different team.”

HBCU Sports: How do you go from a softball coach to transitioning into a football coach? That’s an interesting story.

Morgan: “The one who really gave me a shot was Patric Simon, our [former] athletic director here at Langston. If it wasn’t for him, I wouldn’t have had a chance to display my leadership skills. He gave me the opportunity and I took it and ran with it. The team got better each year and before it was all said and done, I ended up with 31 wins and 19 losses.”

HBCU Sports: What did you learn from that experience?

Morgan: “I actually ended up learning the difference in delivery when coaching student-athletes. I couldn’t coach young ladies the same way I would coach young men. I had to learn how to communicate with my student-athletes better. You have to use different vocabulary and different ways to push them as opposed to young men. What I also learned is that dealing with the young ladies is that they do a great job on the academic side of things. With young men, you have to keep a thumb on them. When it’s all said and done, it was a great experience for me and I enjoyed every single second of it. If it wasn’t from that start, I wouldn’t be where I am today.”

HBCUSports: So what you’re saying is that if it hadn’t been for softball, you wouldn’t have been a football coach, right?

Morgan: “That’s exactly what I’m telling you (laughs). I had to take the same leadership skills I learned from softball and bring them to football. It was the same type of work ethic. I actually started off as a (college) baseball player at Southern University and then at Jackson State. I ran into some injuries, and that’s the reason I wasn’t able to finish playing the sport of baseball. That’s how I ended up playing football. The same thing that brought me to college, which was baseball, was gone. Fours year after (coaching) softball, I ended up being a football coach.”

HBCU Sports: It seems like being a football coach was never really on your radar at all.

Morgan: “I really was not looking to be a head football coach. Sometimes you expect certain things to happen, but they really don’t. You have a goal set and sometimes God has a different plan for you.”