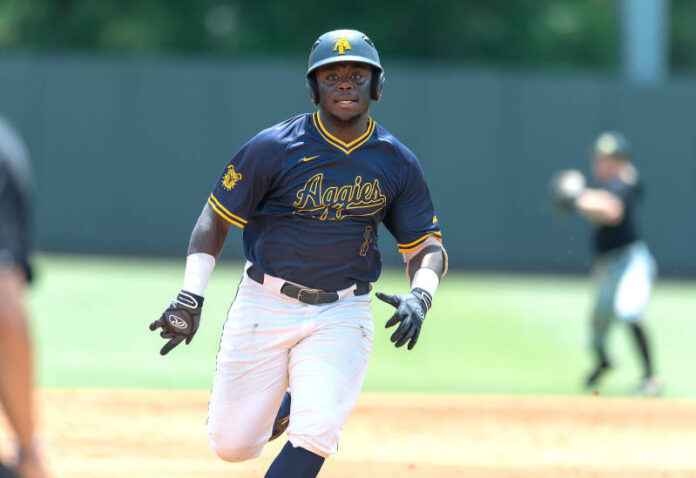 Once the skies did clear, Purdue, who had a double-digit lead when the delay started in the eighth inning, went on to defeat the Aggies 14-4 in an elimination game at the NCAA tournament Chapel Hill Regional at Boshamer Stadium Saturday.

But there is no timetable on how long the 2018 N.C. A&T baseball team will be remembered. The Aggies (32-25), the No. 4 seed out of the regional, won a school-record 32 games, ended a 13-year Mid-Eastern Athletic Conference championship tournament title drought, they won the regular-season for the first time in 13 years, they won a school-record 16 conference games and they were an impressive 20-11 at home.

To cap it off, they were rewarded with a trip to the NCAA tournament. The Aggies came into Saturday’s game not willing to concede their season would end, however.

Over the first three innings of the game against the Boilermakers (38-20), the second seed out of the regional, the Aggies were their equal. After giving up two runs in the visitor’s first, the Aggies got one of those runs back when junior Dawnoven Smith singled through the right side for an RBI single that scored senior Forest Kimbrell from second after Kimbrell singled and stole second.

It was the Aggies first run scored at Boshamer Stadium in five tries after being shut out by the North Carolina Tar Heels in 2008, 2014 and twice in 2018.

N.C. A&T evened the score at 2 in the second inning when Kimbrell hit a line-drive single over the head of Boilermaker shortstop Harry Shipley into left field. Redshirt freshman Justin Williams scored after he reached on a fielder’s choice and moved to second on a single from senior Greg White.

The Aggies then chased Purdue left-hand starter Gareth Stroh from the game in the third. Smith started Stroh’s troubles by opening the inning with a triple off the 400-foot signage marked on the wall in deep center field. RHP Trent Johnson replaced Stroh and had his first pitch roll to the backstop allowing Smith to score to give the Aggies a 3-2 lead.

But the Aggies relinquished the lead in the fourth. With the bases full of Boilermakers, Nick Dalesandro singled to right field to tie the game at 3 as Evan Warden scored. An RBI sacrifice fly by Skyler Hunter gave the Boilermakers the lead for good. When Jacson McGowan recorded an RBI single through the right side it gave Purdue a 5-3 lead and ended the afternoon of N.C. A&T starter Michael Johnson (RHP). Johnson went 3.2 innings and surrendered six runs with no strikeouts.

“They made it really tough on Michael Johnson and that was kind of the story of the game along with some mistakes and not filling up the zone throughout the game,” said Hall.

Purdue put the game away with a six-run sixth inning to take an 11-3 lead. The Aggies scored their final run of the 2018 season in the ninth inning. Junior pinch-hitter James Rorie reached on a two-base error and White brought him home with an RBI single through the left side.

White was 5-for-9 in the regional including a 3-for-5, one-RBI day on Saturday. Kimbrell went 2-for-5 with an RBI on Saturday and Smith added a 2-for-4 day that included a run scored and an RBI.

“I think we played our best ball in the conference tournament and then we had two weeks off while everyone else was still getting into their rhythm,” said Smith. “That hurt us in some areas, not being able to see live pitching. Our pitchers not getting up there and facing live batters definitely played a factor.”

Key sluggers in Smith and Zach McLean will return along with promising second baseman Justin Williams. Sophomore outfielder Shane Faulk also has a lot of promise and the Aggies played all season without All-MEAC shortstop Brandon Melendez. Sophomore Camden Williamson will also be coming back from injury.

Strong defensive outfielder Jason King and Rorie, a reserve first baseman, are slated to come back.

Perhaps best of all for the Aggies is that most of their pitching staff that posted a 4.18 ERA is back including weekend pitchers Johnson and Tim Luth (RHP).

“Our seniors may not have the ability to reflect on it this season for a few days because they’re disappointed in having their season ended today,” said Hall. “One day they’re going to be able to look back and be proud that they were a major part in building the foundation of this program.

My goal is to have this group of seniors come back and see an even better product than they saw when they were here and see guys have a better experience as well. We want to keep growing and getting better. I want them to be very proud of where we end up.”