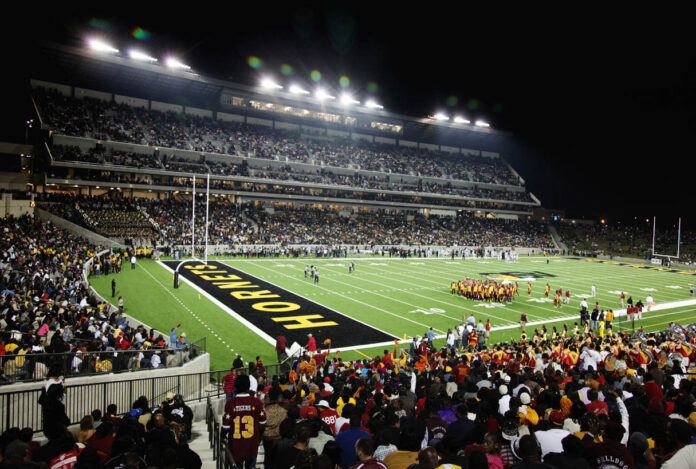 “The overall schedule is a challenging schedule,” Alabama State head coach Donald Hill-Eley said. “The first four opponents are champions of their conferences. Our work is cut out for us to start the season; it is a champions test for the first month. We have to be healthy after that test to get ready for conference play.”

Alabama State opens the season at home against the defending SIAC champion Tuskegee in the Marion Nine Labor Day Classic on September 1, the second consecutive season that the Hornets will open with one of their long-time rivals. Fans attending the game are encouraged to wear white as the game will be a “White Out” to open the 2018 season at ASU Stadium.

Following the contest against Tuskegee, Alabama State will hit the road for six consecutive games, beginning with SEC West Division champion Auburn, coming off a berth in the Chick-Fil-A Peach Bowl. The Hornets stay on the road to face Kennesaw State (Big South champion) on September 15 and then Grambling State (SWAC champion) on September 22.

Following the first four games, the Hornets will have a bye week the week of September 29 before starting conference play.

“It is big to have a bye week,” Eley said. “And even though we open up in our stadium in September and don’t get back home until November, some of our road games are in proximity to Montgomery. We’re expecting Hornets fans to join us on the road, and we’re prepared to put our best foot forward as we represent Alabama State.”

The Hornets open conference play against Alcorn State on the road October 6, before stepping out of conference play October 13 against South Alabama – a member of the Sun Belt Conference (FBS).

“Everybody is getting better in the conference,” Eley said. “There are changes all over the league, so whatever history we have had with those teams will change. Alabama A&M has a new staff, Jackson State has a new offensive coordinator which makes them more competitive, Mississippi Valley will have new tendencies and Alcorn had changes on both sides of the ball. It is wide open, and we have to approach it as that. We have to play every week.”

Following the contest against South Alabama, the Hornets will have their second bye week before they head to Birmingham on October 27 for the Magic City Classic against Alabama A&M. Alabama State will be the visitors in this year’s contest.

Alabama State return to the ASU Stadium in November for back-to-back home contests. The November 3 game against Texas Southern will be Faith and Family/Connection Day. On November 10, the Hornets will celebrate Military Appreciation Day: Salute to Service in a contest against Jackson State.

Following a trip to Prairie View A&M on November 17, the Hornets have a short week to prepare to face Mississippi Valley State in the Turkey Day Classic.

“We’re excited to have Mississippi Valley as our Turkey Day Classic opponent,” Eley said. “We expect a great crowd for our matchup against the Delta Devils since it provides a conference game late in the season. We will be prepared and find a way to win.”

Season tickets for the 2018 football season go on sale online April 1 and in the Ticket Office at ASU Stadium April 2.