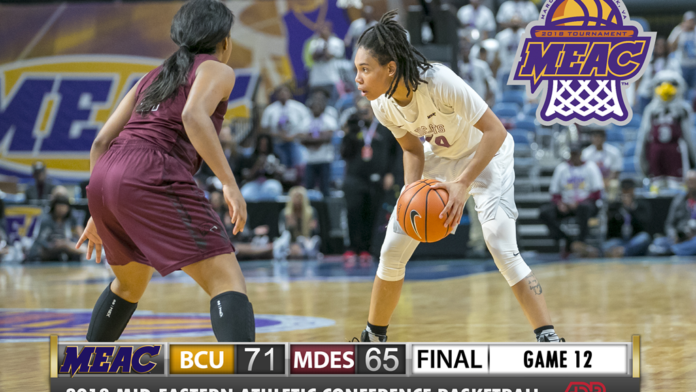 NORFOLK, Va., – Second-seeded Bethune-Cookman, down one to seventh-seed Maryland Eastern Shore at the half, used a 16-0 third-quarter run to take control of the game, then beat back a fourth-quarter rally to earn a 71-65 win over the Lady Hawks in quarterfinal action of the Mid-Eastern Athletic Conference (MEAC) Basketball Tournament Wednesday at the Scope Arena.

The Lady Wildcats, with assistant coach Chandler McCabe filling in for head coach Vanessa Blair-Lewis who gave birth on Monday, advanced to Friday’s 2 p.m. semifinals against the winner of Thursday’s quarterfinal matchup between Morgan State and Hampton.

Junior guard Angel Golden poured in 29 points on 8-14 shooting from the field, including a 3-6 effort from three-point range and a 10-10 performance from the charity stripe. Ashanti Hunt, also a junior, added 22 points — including 14-19 from the free throw line — and seven rebounds in the win, which lifted the Lady Wildcats to 24-5.

Chasimmie Brown had a game-high rebounds to lead Bethune-Cookman on the boards and added six points, while point guard Emily Williams contributed seven points for the winner.

UMES, which completed its campaign at 11-19, was led by junior Ciani Byrom with 15 points, which included a 9-11 showing from the free throw line. Jordyn Smith and Tori Morris, two of four Lady Hawks completing their college careers, added 10 points each. Martha Thompson grabbed a team-high eight rebounds and had an equal number of points in the loss.”

“We knew coming it that it would be a tough matchup,” said McCabe. “Coach Batchelor does a great job in getting his team ready so we knew we were in for a fight. The game featured some runs by both teams but anytime you get a win in a tournament, you are happy about it.”

The Lady Wildcats scored the first 14 points of the game, a rally which Golden ended with two of her 10 free throws with 6:28 left in the first period before UMES came back to within 20-10 after one.

The Lady Hawks kept their momentum with a 20-9 second quarter which gave them a 30-29 lead at halftime, somewhat of a surprise.

“They (the Wildcats) came out really shooting the ball well, almost 60 percent early. “We got down 10 or so early before taking the lead at the half, but the third-quarter drought, which was almost seven minutes, hurt us as we appear to lose some of our confidence and swagger.”

But the third quarter would be mostly Bethune-Cookman as the Lady Wildcats got a 3-pointer from Golden to start the period and went 16-0 run that was capped by a 3-pointer by Williams with 3:57 left in the period and the number two seed ahead 45-30. UMES got the last five points of the period to close the gap to 45-35.

The Lady Wildcats took control early in the final quarter, using a 6-0 run to stretch their lead to 16 again, 51-35 with 7:38 to play. The closest UMES came after that was the final margin.