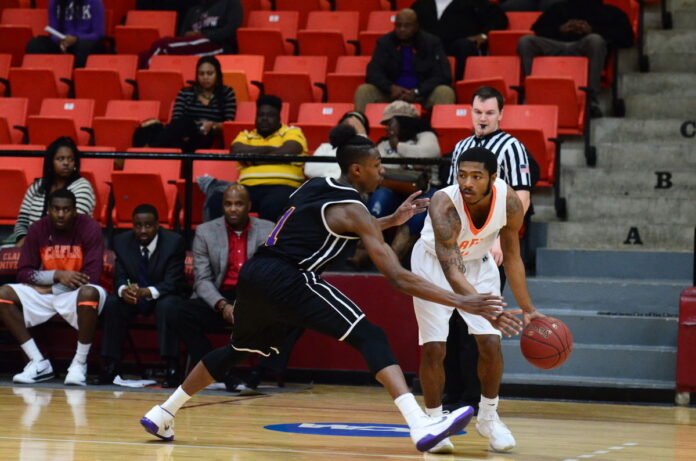 BIRMINGHAM, Ala. (February 27, 2018) – The Southern Intercollegiate Athletic Conference (SIAC) kicked off their second day of opening rounds for the 2018 SIAC Basketball Tournament.

Jalen Lewis led the Dragons with 21 points to fire through Paine Lions, 80-60. Defensive Player of the Year, Kendarius Ash led closely behind as he posted 18 points to add to his 22 rebounds. Despite starting with a technical foul, the Lane Dragons led the entire game as most of their post came from off the bench which accounted for 35 of their points. Paine struggled shooting from the field as they only managed to post 39 percent of their shots which caused their fall to 6-21 on the season. Lane Dragons will advance to the quarterfinals where they will face the Claflin Panthers on Thursday at 3:15 p.m. CST.

Dominique Williams led the Lady Panthers to their first win in the opening rounds of the 2018 SIAC Basketball Tournament as they defeated the Lane Dragons, 68-51. Williams (19), Fields (18), and Stokes (14) all led the Lady Panthers in double-digit scoring. Twenty-three of Claflin’s points came from Lane’s turnovers which gave them an advantage over the Lady Dragons. Destiny Irvin led in scoring with 18 points for the Lady Dragons while Antrice McCoy and Mariah Hopkins both added 10 a piece. The Lady Panthers will advance to the quarterfinals as they face No. 2 LeMoyne-Owen College on Thursday at 1:00 p.m. CST.

Jordan Campbell led the Thorobreds with 21 points which included shooting 60 percent from the floor and perfect shooting from behind the arc and the charity line. The Thorobreds led for most of the game until the Paine Lady Lions gained on them coming within one point in the third quarter. Keondra Archie, who earned a spot on the all-conference team, led the Lady Lions by posting a game-high 14 points and 10 rebounds. In spite of everything, the Lady Thorobreds held the Lady Lions to a 27.9 percent shooting from the field as they took advantage and managed to finish shooting 42.9 percent. The Kentucky State Lady Thorobreds advance to the quarterfinals as they face No. 2 Albany State on Thursday, March 1 at 5:30 p.m.

Randy McClure had an all-around excellent performance for the Golden Rams as he led shooting 69.2 percent from the field and 81.8 percent from the free throw line which attributed to his 27 points. In the first half, Kentucky State was in one point of the Golden Rams as Ray Croon was hot shooting leading with 13 points most of which were made in the paint. As the second half opened up, Albany State improved their shooting and made a run of 15 points lifting them over the Kentucky State Thorobreds. Kentucky State finished with a 9-18 record overall on the season. Albany State Golden Rams will advance to the quarterfinals where they will face No. 2 Lane on Thursday, March 1 at 3:15 p.m.