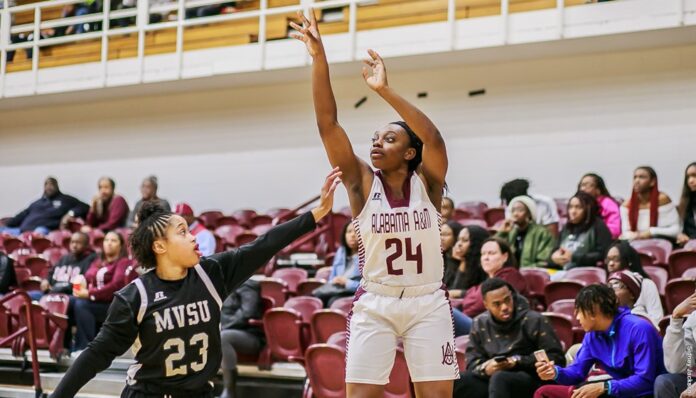 Grambling State (11-11 overall, 8-3 SWAC), which extended their win streak to four games, were tied with Alcorn State (9-13, 5-6) at eight after the end of the first quarter, but were able to take a 28-23 advantage into the break. The Lady Tigers out-scored the Lady Braves in the third, 19-14, and led by as many as 20 points in the final quarter to pick up the victory.

Hill led the way for the Lady Tigers with 22 points, six rebounds, six assist, and four steals, while Boyd added 20 points, four rebounds, one assist and one block.

Grambling State held a slim 37-35 advantage after a bucket by Miracle Rushing with 3:30 left in the third quarter. However, the Lady Tigers closed out the period on a 10-2 run to take a 47-37 lead into the final quarter.

Grambling State extended the lead to 60-42 after a layup by Boyd with 4:32 remaining and Alcorn State could never recover.

The Devilettes established what would be their largest and last lead of the game in the opening minutes, as the Lady Bulldogs trailed by two with 5:26 on the clock. A jumper by AAMU’s sophomore guard Lauren McKee would give the Lady bulldogs a 23-20 lead in the closing of the second quarter.

AAMU maintained their momentum in the final quarter, taking a 13-point lead, 50-37, midway through to eventually secure the 57-49 win.

UAPB (5-16, 3-8 SWAC) held a 28-27 lead going into the second half, but a three-pointer by Gipson gave the Lady Hornets a 34-30 advantage halfway through the third. The teams traded baskets in the fourth, until a lay-up by Destiny Brewton put the Lady Lions up 48-42 with 7:02 left in the game.

Alabama State (6-16, 4-7 SWAC) reeled off six unanswered points as Tatyana Calhoun put two baskets home to sandwich a perfect trip to the line by Kayla Stephens. The Lady Hornets later grabbed a 53-52 lead in one of two free throws by Gipson, before missing a three-pointer with 26 seconds remaining that allowed UAPB to have a chance to take the lead in the final seconds.

After Harris’ lay-up, the Lady Hornets missed a potential game-winning shot in the final seconds that was rebounded by UAPB’s Malaik Muhammad who sealed the game at the free throw line with one second remaining.

Calhoun led the way for Alabama State (6-16, 4-7 SWAC) with 18 points on 80 (8-of-10) percent shooting from the floor. Arleatha Gipson scored a career-high 13 points, while Kenya Pye added nine points and Shamyiah Smith dished out six assists.

Southern pushed ahead early on the strength of a 12-4 run to start the game en route to a 25-12 advantage at the end of the first quarter. After leading by as many as 18 and taking a 15-point lead into the lockers, the Jaguars nearly squandered it as Jackson State (12-8, 7-4 SWAC) dominated the third frame.

Christina Ellis scored 12 of her Jackson State-leading 16 points during an 18-6 Lady Tiger run that brought JSU within five. Derica Wiggins later buried a trey with 12 ticks left to cut Southern’s lead to four (51-47) heading to the fourth.

Jackson State got within a basket of Southern on two occasions, but Southern pulled away when — after Ellis sank a jumper to bring Jackson State within one at the midpoint of the stanza — Jaden Towner answered with a three-pointer, and O’Bear scored five points during an 11-3 Southern run that virtually sealed the deal for the Jaguars.