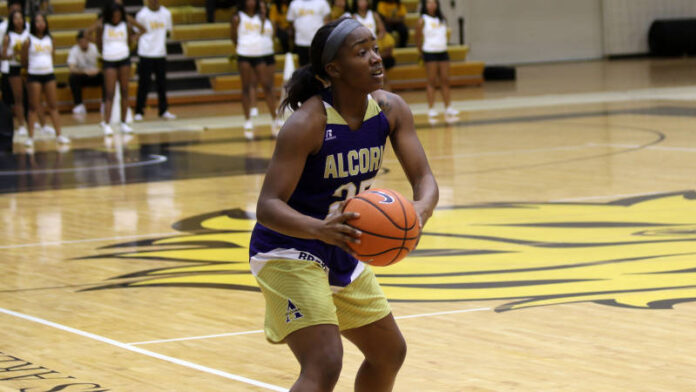 For Grambling State (7-11, 4-3 SWAC), Monisha Neal finished with a double-double of 16 points and 12 rebounds. Jazmin Boyd came off the bench and scored 11 points, including 6-of-6 from the free-throw line. Shakyla Hill registered 11 points, six assists and four boards.

With both sides tied at 30 following the first half, Jackson State turned the tide in its favor with a defensive stand. After the sides traded buckets to remain knotted at 36, Jackson State reeled off 12 unanswered points and held Grambling scoreless from the field for a five-minute stretch spanning from 7:13 remaining to 2:29 left in the frame to go ahead by 10. Grambling did cut it within four, but Ellis buried a jumper at the buzzer to give Jackson State a 52-46 lead going into the fourth.

JSU proceeded to increase its lead to as many as 11, but a 10-2 GSU run brought the visitors within one possession midway through the final period. Jackson State regrouped to put together a decisive 10-3 run of its own, with Ellis scoring half of her points in the fourth to hold off Grambling.

Down 42-38 entering the final quarter, Alcorn (8-10, 4-3 SWAC) fell behind by double-digits as Alabama A&M (8-9, 3-3 SWAC) scored six unanswered points to open the period. From there, Alexus Freeman connected on a three-ball to spark the Lady Braves’ offense. The long ball was ultimately the difference for Alcorn State, as — following a Miracle Rushing lay-up — Cloe Lane sank a trey to bring Alcorn within one possession.

Jameica Cobb layed one home to push the Lady Bulldogs ahead 50-46, but Rushing responded in kind on the other end for Alcorn, and Tia Sanders nailed the go-ahead bucket from downtown. Alcorn went on to seal it when Rushing again scored from inside, and — after AAMU’s Tierra Dark went 2-for-2 from the line — Freeman made a dagger three-pointer to push Alcorn ahead by four with 39 ticks left.

Freeman led the Lady Braves with 16 points and five assists. Rushing recorded a double-double with 12 points and 11 rebounds.

Ashlyn Dotson scored 12 points for the Lady Bulldogs. Dark, Deshawna Harper and Natalie Collins each netted eight points each. Alcorn limited the Lady Bulldogs to a 31 percent shooting clip in the game (18-of-58).

Despite being outrebounded 48-43 and outshooting 35.6 percent to 34.8 percent by UAPB (3-13, 1-5 SWAC), the Lady Panthers surged ahead thanks in large part to a big second quarter where they parlayed a 7-2 opening run into a 20-11 scoring advantage. Talisha Presley sparked the Lady Panthers with seven of her team-high 17 points in the period.

Prairie View (5-12, 3-3 SWAC) went on to control matters from there, though Arkansas-Pine Bluff managed to put together six quick points at one point in the third quarter to get within six. However, PVAMU immediately rebuilt a double-digit advantage and never led by less than seven the rest of the way.

Alexis Robinson and Kendra Hicks were effective off the pine for Prairie View, combining for 25 points on 10-of-11 shooting. Robinson scored 14 points on a perfect 5-of-5 shooting and grabbed six rebounds, and Hicks added 11 points and 11 rebounds while shooting 5-of-6. Shala Dobbins was held to just two points on 1-of-11 shooting, though she did dish out six assists.

A low-scoring affair early on, TSU opened the game on a 10-2 run, with Kaitlyn Palmer accounting for half of the offensive spurt. From there, the Lady Tigers had things under control from there, eventually taking a 24-15 advantage into the break. MVSU (0-18, 0-6 SWAC) showed signs of life in the third, when — after Texas Southern had built its lead to 14 — LaKendra Bassett and Kristy Parker led a Devilette charge, combining to account for 13 points during a 15-6 MVSU run that brough Texas Southern’s lead to just five. However, McElrath scored inside late to give Texas Southern a bit more cushion.

In the final quarter, the Lady Tigers pulled away, doubling up the Devilettes to the tune of an 18-9 advantage. TSU scored 30 points in the paint.

Alabama State led 27-25 at the break and threatened to break the game open in the third quarter after opening it on an 8-4 run powered by Tatyana Calhoun and Keimeshia Walker. The Jaguars rallied behind Green, who scored eight points over the final five-plus minutes of the third as Southern outscored Alabama State 18-10 to take a 47-45 lead.

Green was the difference for Southern (7-9, 6-1 SWAC), scoring six points during a 13-2 Jaguars run that opened the fourth quarter and resulted in a 11-point lead. Alabama State got no closer than seven the rest of the way.