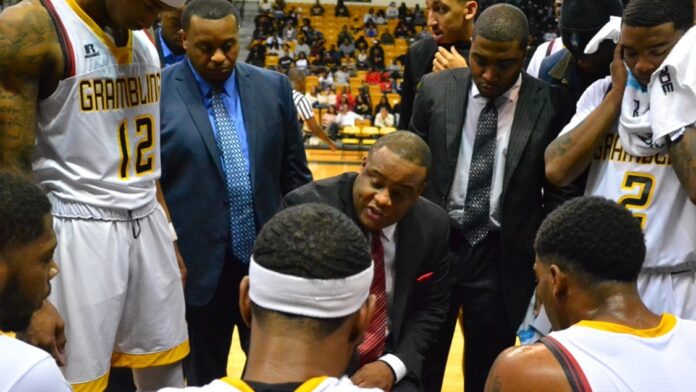 PRAIRIE VIEW, TX. –  Martaveous McKnight racked up season highs in points (39), field goals made (13-of-20) and free throws made (10-of-11) to go along with six rebounds, five assists, three steals and a blocked shot as the Golden Lions remained the lone undefeated team in Southwestern Athletic Conference play Saturday on the road at the William J. Nicks Baby Dome.

BATON ROUGE, La. – A late 13-6 run by the Hornets got them within a point on a Reginald Gee 3-pointer with three seconds remaining, but the Jaguars’ Torey Mayo made 1-of-2 free throws and time expired without the Hornets getting a last shot.

Southern (7-13, 3-4 SWAC) were led by Eddie Reese, who scored 14 points, Sidney Umude who had 11 points, seven rebounds and three blocks and Jared Sam nearly produced a double-double with nine points and 12 rebounds, two steals and a pair of blocks.

Maurice Rivers led Jackson State (9-11, 6-1) with 12 points as he was the lone JSU player to reach double figures.

Junior Dante Sterling poured in a career-high 20 points. He was six-of-eight from the field and four-of-five from beyond-the-arc. He also grabbed five rebounds.   Senior A.J. Mosby registered a double-double with 16 points and 10 rebounds and also dished out five assists. Freshman Troymain Crosby pitched in with a solid eight points and five rebounds off the bench.   Alcorn dominated the glass and held a 43-28 rebounding advantage and outscored the Bulldogs 11-0 in second chance points. The Braves also carried a 30-18 edge in points in the paint.

HOUSTON, TX – Donte’ Clark scored a season-high 41 points on 16-of-26 shooting including 7-of-12 from 3-point range and grabbed eight rebounds as the Tigers overcame a four-point deficit at halftime to top the Delta Devils at the H&PE Arena.

Texas Southern (4-15, 4-2 SWAC) responded with a big second half, outscoring Mississippi Valley State 49-31 in the second half.

Trayvon Reed added a double-double with 15 points and 17 rebounds and Brian Carey served as the floor general with 10 assists.