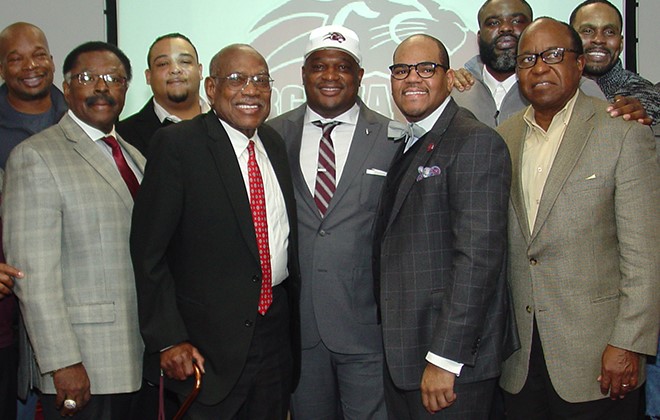 Virginia Union University has announced that Alvin Parker, Ph.D., will be the 27th Head Coach in the history of the VUU Football Program at a news conference on Monday, December 18, at the L. Douglas Wilder Library on the VUU campus.

Dr. Parker served as offensive coordinator and running backs coach at Virginia Union for five successful seasons. At VUU, Dr. Parker was part of a program that played in the 2000, 2001 and 2003 CIAA title games.

“Dr. Parker won CIAA championships here at VUU as a player and later as an assistant coach under Willard Bailey,” said Virginia Union Athletic Director Joe Taylor. “He also won CIAA championships as the Assistant Head Coach and Offensive Coordinator at Elizabeth City State University. While experiencing success on the field, he has earned his undergraduate, Master’s and Ph.D. An accomplishment that few football coaches in America have obtained.”

During his collegiate playing days at VUU, Dr. Parker earned offensive MVP honors in 1996 and 1998. He holds the school record for single-season TDs and the Gold Bowl record for the longest TD — a 79-yard reception.

Dr. Parker returns to VUU after serving the past two seasons as assistant head coach and offensive coordinator at Saint Augustine’s University in Raleigh, N.C.

A 2016 AFCA National Assistant Coach of the Year Finalist, Dr. Parker has 19 years of coaching experience including 14 as a highly successful offensive coordinator.

During his years as an offensive coordinator, Dr. Parker helped guide teams to five CIAA title games, two NCAA playoff appearances and three Pioneer Bowls. As leader of one of the nation’s premier offensive attacks at Elizabeth City State University, Dr. Parker was recognized as a 2015 National Assistant Coach of the Year Finalist by the American Football Coaches Association (AFCA).

A native of Washington, D.C., Parker is the proud father of Alan and Lani.