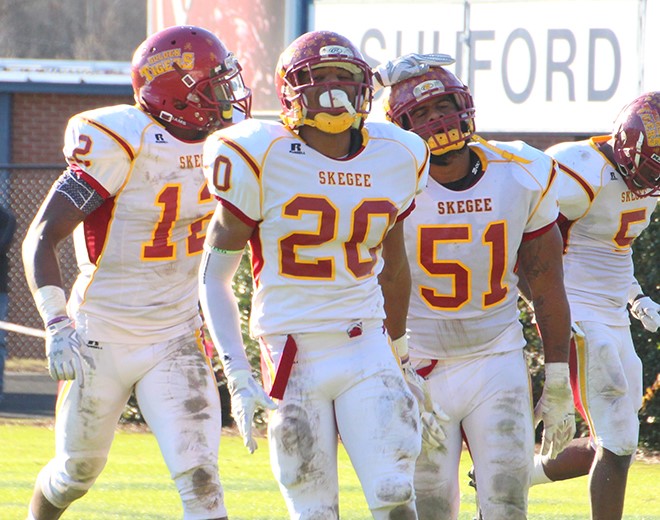 FRANKFORT – Seeking revenge from last season’s homecoming upset to Kentucky State, the Tuskegee Golden Tigers returned the favor taking down the Thorobreds on their homecoming 26-21 Saturday afternoon in Frankfort, Kentucky at Alumni Stadium.

Hoderick Lowe ran for a career high 273 yards on 13 carries and set the tone early with an 85 yard run on Tuskegee’s opening possession, but the drive stalled in the red zone after a 15-yard missed field goal by Dalton Hall.

On the ensuing drive, Javarrius Cheatham took a pass 74 yards from Jamarcus Ezell after making several would be Thorobred tacklers miss on his way to the end zone making the score 7-0.
KSU would quickly respond two drives later when Ezell tossed an interception returned by Christopher Crawley for a 52 yard touchdown.

The Thorobreds took the lead just before halftime when quarterback Paul Campbell snuck in from one yard out to give his team a 14-7 lead, which is how the score would stay at the break.

Lowe, who had 92 yards on only five carriers at halftime, picked up where he left off scoring on an 84 yard touchdown run on the opening drive of the second half. The point after try was blocked making the score 14-13.
After a three and out by KSU, Jeff Bowens muffed a point giving the ball right back to the Thorobreds at their 31 yard line. On the very next play, senior linebacker Osband Thompson intercepted Campbell’s pass ending the drive.

With 3:03 remaining in the third quarter, KSU extended its lead to 21-13 after Campbell connected with Cameron Gore on a 17-yard play action touchdown pass. One minute later, Lowe’s career day continued finding the end zone for the second time on a 73 yard touchdown run for TU. The Golden attempted a 2-point conversion that failed leaving the score at 21-19 at the 1:52 mark of the third quarter.

Tuskegee was able to flip the field when KSU punter Turner Warren dropped his intended punt, then tried throw it while getting tackled. The pass attempt ended up falling incomplete, giving TU the ball at the KSU 21 yard line. Three plays later, Justice Owens walked in untouched giving the Golden Tigers its first lead since the first quarter at 26-21.

The Golden Tigers will return home next Saturday after being on the road the entire month of October to host Central State. Live video coverage on the Tuskegee Digital Network will start at 12:45 p.m.