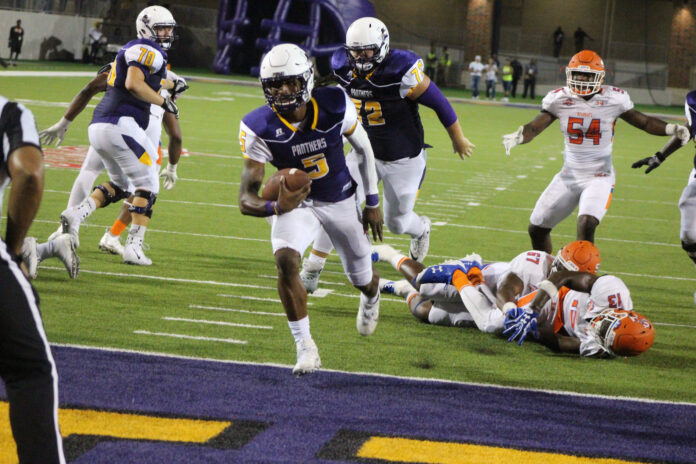 As the first month of the football season comes to a close the Prairie View A&M University football team sits at 2-2. After dropping their first two contests to Southland Conference opponents in Sam Houston State and Nicholls State, Willie Simmons’ football team has righted the ship, winning two consecutive games in dominating fashion against Alabama State and Jackson State.

This weekend the Panthers head to Dallas for a showdown with the Grambling State Tigers in a game that undoubtedly has SWAC West division title implications as Coach Simmons said postgame last week “Everyone knows how important the Grambling game is. They’ve been our Achilles heel for the last two years. We understand what’s at stake next week.”

These are three takeaways from the Panthers through the first month of the 2017 season.

1. Starting fast is critical for PVAMU
Perhaps the biggest predictor of a Panthers victory this season has been their play during the first 30 minutes of action. In their first two games against Sam Houston and Nicholls State, PVAMU was outscored in the first half 64-20 and was outgained 655-377. Not surprisingly, the Panthers came out on the losing end of both contests. But in the pair of matchups, in which the Panthers were victorious against SWAC opponents Jackson State and Alabama State, the Purple and Gold broke fast out of the gates outscoring the Tigers and the Hornets by a margin of 41-3.

The Panther defense, led by DeVohn Reed and Jalyn Williams allowed a combined 202 total yards in both contests, while the highflying Prairie View offense captained by Lavell McCullers accounted for 436 first-half yards. Put simply, the Panthers can ill afford to have a lethargic start against the premier teams in the SWAC such as Alcorn State, Southern, and the aforementioned Grambling State Tigers if they want to hoist the SWAC Championship trophy in December.

2. Defense and Turnovers
It is often said that there are two guarantees in life; “death and taxes”, but many coaches worldwide would make an addendum to the aforementioned statement by adding the cliché “ defense wins championships”.

After struggling mightily in their first two games, giving up 40 points in each contest, defensive coordinator Ralph Street and his defense has certainly rebounded. The Panther defense has only allowed 9 points in the last two contests and held Alabama State and Jackson State to a combined 3rd down conversion rate of 26 percent. The Purple and Gold pass defense has also stiffened up, surrendering a meager 177 combined passing yards and a lone touchdown in the same time span after giving up more than 530 yards passing and five passing scores in the first two contests.
Despite the Panthers struggles in the first two games keeping opposing offenses out of the end zone, the Prairie View defense has proved to be extremely proficient in forcing turnovers this season. The defensive unit has forced 10 takeaways through four games this season, five of them coming against Jackson State this past weekend.

Sophomore defensive back Juice Parker leads PVAMU with a pair of picks, one of them being returned for a touchdown against Alabama State. It is imperative that the defense provide extra possessions for the offense by producing turnovers, and continue to get off the field on 3rd downs as SWAC play continues.

McCullers emerged out of fall camp as the starting signal caller for the Purple and Gold, and while he has not been prolific through the air completing less than 50 percent of his pass attempts, he has been extremely effective on the ground. McCullers is the Panthers third-leading rusher, in addition to averaging 5.4 yards per carry. The City College of San Francisco transfer has been named SWAC Newcomer of the Week a pair of times this season and has totaled more than 250 all-purpose yards in two of Prairie View’s first four contests.

The fleet-footed McCullers allows offensive coordinator Alex Jackson to further diversify his play calling by dialing up designed quarterback runs and more read option plays than he could with previous signal callers. McCullers’s ability to extend plays by breaking the pocket when protection breaks down is also another area where the Panthers have been lacking through the first two seasons of the Willie Simmons era.

Alex Goodwin is a student journalist at Prairie View A&M University and is the host of “The Gameplan”, a sports radio show that can be heard on KPVU 91.3 FM.