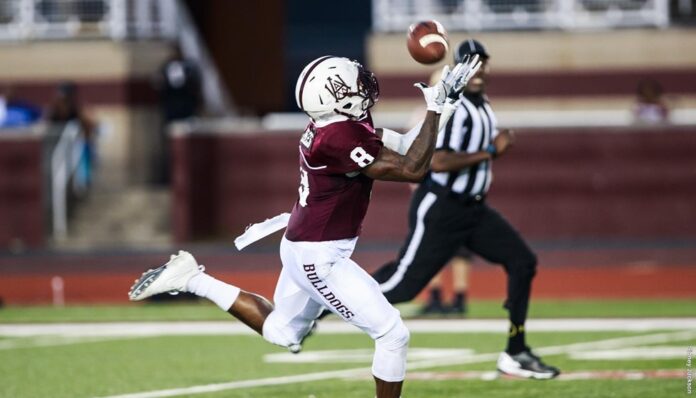 HUNTSVILLE, Ala. — The Bulldogs unleashed a devastating air assault Saturday night highlighted by a 337-yard passing performance and a pair of long-range bombs from quarterback Aqeel Glass.

Glass was good on 22 of 37 passes on the night including a 62-yard, over-the-shoulder, catch-and-run touchdown to Octayvious Miles and an over-the-shoulder 61-yard pass to Ledarion Heath in the 30-13 Louis Crews Classic win over Texas Southern.

Miles had 196 total yards as led the A&M rushers with 70 yards — mainly through a couple of reverses — to go with 100 yards receiving and 26 return yards.

The offensive fireworks came before a crowd that included some of the legends of Bulldog football lore as A&M honored its all-time winningest coach.

The Bulldogs moved out to a 3-0 lead courtesy of a 19-yard Nick Carden field goal on the team’s first drive.

Miles’ 62-yard scoring play came in the second quarter with the Bulldogs holding a 10-0 lead. Miles had beaten the Texas Southern defense and Glass dropped the ball over the receiver’s shoulder into his waiting hands and, after that, it was off to the races.

The Bulldogs widened the gap to 23-0 when Jordan Bentley, who had missed the previous two games, scored his second touchdown of the game. It was the sixth TD he has scored in two seasons against the Tigers.

Bentley’s first score of the game capped a drive that was highlighted by Heath’s 61-yard reception.

In the third quarter, Isaiah Bailey pulled in a Glass pass for 13 yards to give A&M a 30-0 cushion.

A&M was assessed an uncharacteristic 101 yards on 10 penalties, including one that negated a 94-yard Harvey Harris kickoff return.

The Bulldogs return to action next Saturday when Arkansas-Pine Bluff visits for Homecoming. Kickoff is 2 p.m.