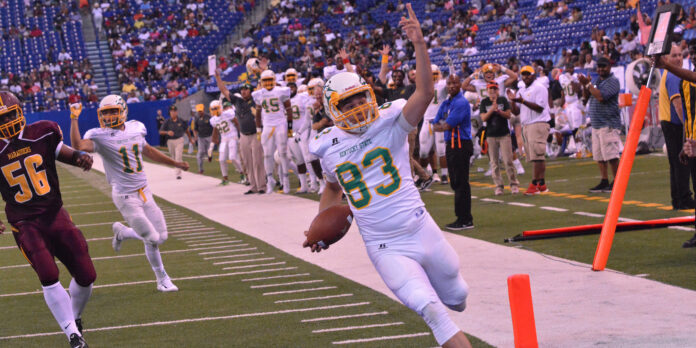 The Thorobreds (2-2, 1-0) opened their conference schedule with a win for the second time in three years, the previous being in 2015 against CSU. The Marauders (0-4, 0-3) continue to struggle as they’ve lost their first three games against SIAC opponents.

As the Thorobreds’ defense kept the Marauders docked, the offense capitalized on mistakes, beginning with a second-half touchdown from junior quarterback Paul Campbell to sophomore wide receiver Jonathan Powell for a six-yard score. The 13-0 advantage didn’t last long as CSU answered with an 85-yard kickoff return for a touchdown, pulling back within six.

KSU responded to the special teams score with a 13 play, 62-yard drive, ending with fake field goal touchdown. As Warren lined up for a 28-yard field goal attempt, he broke to his left after the snap, as junior wide receiver Cort Groathouse flipped the ball to Warren. The Louisville, Kentucky native eluded a tackler for his first career rushing touchdown putting KSU up 20-7.

CSU connected for a 32-yard field goal try, bringing the score within 10, going into the locker at halftime, 20-10.

Sophomore running back Brett Sylve, the reigning SIAC Newcomer of the week, started off the third quarter with a four-yard touchdown run following a seven play, 65-yard drive, putting back KSU on top 27-10.
The Marauders fought to bring the game back within reach with a score following the Sylve touchdown, at 27-16, but it was an error by CSU in the fourth quarter, sealing the deal for the Thorobreds.

As CSU searched for a spark, KSU brought pressure causing a bad snap into the Marauders’ end zone at the 6:31 mark of the final frame. Senior defensive lineman Donovan Cecil fell on the ball for his first career touchdown. KSU allowed another CSU touchdown in the closing minutes of the quarter, finishing off the Marauders with the victory formation in the last two minutes.

KSU will look to continue its winning ways on the road at Morehouse College on Saturday, Sept. 30 at 4 p.m. ET.