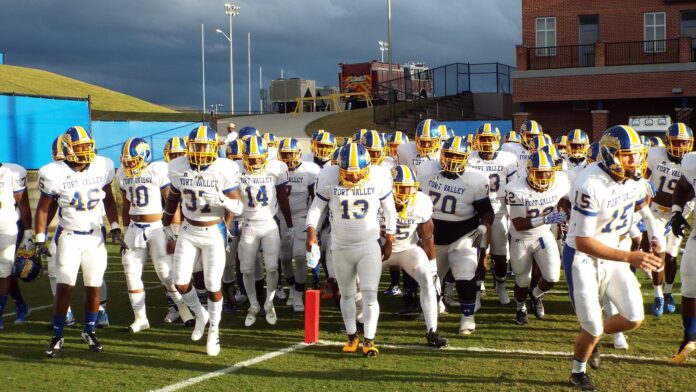 CARROLLTON, Ga. — The Wildcats of Fort Valley State showed up but were no match for the Wolves of the University of West Georgia Thursday night in Carrollton, GA. The Wildcats showed a lot of grit but could not move or stop the football in a 34-9 loss. The team will look to rebound next week in Waycross as they take on Valdosta State University in the Okefenokee Classic.

Weeks of practice were on stage Thursday as FVSU managed to rush for 120-yards and 107 passing yards for the game while allowing their opponent to gain 305-yards on the ground and 227-yards through the air.

Sophomore Running Back Jamari Clark ran the ball hard for the Wildcats while gaining 66-yards on 11 carries and one touchdown run. Clark led the team with five catches for 40-yards as well. Junior Quarterback Slade Jarman stayed on the run all night as he managed to complete 13-of-26 passes for 107-yards and one INT.

Senior Kicker Juan Serna’s 21-yard field goal with 39 seconds left in the third quarter added three points for the Wildcats. Then at the: 47 mark in the fourth quarter Clark ran in from 21-yards out to make the score 9-34.

On the defensive side of the ball, the Wildcats out played the Wolves by making 98 tackles to UWG’s 58. Sophomore Defensive Back Camron Young led all tackles with 16 tackles (8 solos) while Dawayne Pruitt and Kevis Jones added seven tackles each.

The Wolves Kicker Trey Wiggins kicked two field goals in the first quarter to put UWG ahead by six on a 31-yarder (7:04) and a 23-yarder with 1:44 left on the clock. Then with 13:04 to go in the second quarter Travis Custis scored from 14-yards out, Wiggins’ kick was good (0-13). UWG’s Shannon Smith hit Willie Candler on a 10-yard pass for a touchdown with 3:55 remaining before halftime, Wiggins kick was good (0-20). UWG scored another 14 points after coming out the locker room, one at the 11:17 mark and the other with 3:20 left in the game.

FVSU’s next game is Saturday, September 9 in Waycross, Ga., as the team plays Valdosta State at 7 p.m.