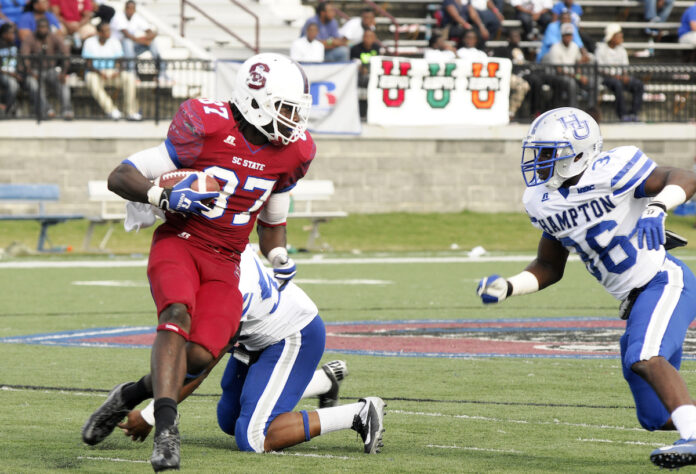 The NFL Draft gets going Thursday in Philadelphia.

Supporters of historically black colleges and universities know it’s likely less than a handful of players from their beloved institutions will be taken in the annual selection show. It’s more likely they’ll get their shot at earning a spot on an NFL roster as an undrafted free agent.

Before the draft starts, we took a look at the last time each NFL team chose a player from an HBCU and how they panned out. The results are interesting to say the least.

New England chose South Carolina State tight end Arther Love in the sixth round of the 2001 draft. The 6-4, 250-pounder remained with the team for two seasons and spent 2003 with the Broncos but never recorded a catch.

Buffalo selected Florida A&M offensive lineman Jamie Nails in the fourth round of the 1997 draft. He logged 51 starts in 78 games, during a six-year career that also included a stint with the Dolphins.

Miami went with Alabama A&M defensive end Frank Kearse in the seventh round (231st overall) of the 2011 draft. Since, he’s recorded 43 tackles, including 5.5 sacks, and suited up for five other teams. He was a member of the Patriots’ practice squad in 2016.

Originally a South Carolina signee, Kenrick Ellis ended his college career at Hampton. New York picked the 6-5, 346-pound defensive lineman in the third round of the 2011 draft. He spent four years with the Jets and played for both the Vikings and Giants in 2015. The former two-time first-team All-MEAC choice has logged 59 tackles and a sack during his career.

Denver picked Jackson State wide receiver Leroy Fields in the seventh round (246th overall) of the 2000 draft, but he never played in a regular season game in the NFL.

The Raiders picked up Tennessee State offensive lineman Anthony Morris in the seventh round of the 2015 draft, but released him before he ever suited up for the team in regular season action. He now plays for the Canadian Football League’s Toronto Argonauts.

The Chargers selected cornerback Drayton Florence in the second round (46th overall) back in 2003, making him Tuskegee’s highest drafted player ever. The 6-0, 189 Florence, who ran a 4.39 in the 40-yard dash and recorded a 35-inch vertical leap at the annual NFL Scouting Combine, enjoyed an 11-year career while playing for seven different franchises. He registered 20 interceptions and 486 tackles as a professional.

The Chiefs took Jackson State wide receiver Sylvester Morris with the 21st overall pick in 2000. He had a promising rookie season, catching 48 passes for 678 yards and three scores while seeing action in 15 games. However, it wound up being his only full season in the NFL. Myriad knee injuries derailed his career.

Hampton product Justin Durant was taken in the second round (48th overall) of the 2007 draft. The former three-time MEAC Defensive Player of the Year has started in 92 of 121 career games, registering 635 tackles. He’s currently a free agent after spending last season with the Cowboys.

Indianapolis struck gold when it took Howard defensive back Antoine Bethea in the sixth round of the 2006 draft. A starter from Day at safety, Bethea went on win a Super Bowl and be tapped for the Pro Bowl twice as a member of the Colts. He was picked for the Pro Bowl again in 2014 with the 49ers. He’s recorded 1,046 tackles, 19 interceptions, 61 pass deflections and seven forced fumbles. He’ll start 2017 with the Cardinals.

Houston picked Lane College speedster Jacoby Jones in the third round of the of 2007 draft. Jones spent three seasons with the Texans before going on to earn all-pro honors as a returner and win a Super Bowl with the Ravens in 2012. He last played in the NFL for the Steelers in 2015, and is currently on the National’ Arena League’s Monterey Steel’s roster.

Baltimore picked up Tray Walker, a promising prospect at defensive back from Texas Southern in the fourth round of the 2015 draft. After seeing action in eight games as a rookie, Walker was died tragically after a dirt bike accident in March 2016.

The Bengals snatched up North Carolina A&T tight end Craig Thompson in the fifth round of the 1992 draft. In two years with the team, he logged two starts and caught 36 passes for 281 yards and three scores.

Cleveland nabbed Norfolk State defensive back Don Carey in the sixth round of the 2009 draft. He’s been with the Lions since 2011 and led the NFL in special teams solo tackles in 2015.

Philadelphia chose Bethune-Cookman wide receiver Antwaun Wyatt in the sixth round in 1997, but he played just one game in a short-lived NFL career.

Washington went with Hampton defensive end Greg Scott in the seventh round of the 2002 draft (234th overall). He played in 14 games in three NFL seasons as a member of the Redskins and Bengals, ending his career with 32 tackles.

New York chose Hampton offensive lineman Isaac Hilton in the seventh round of the 2004 draft, but cut him before the season started.

San Francisco picked up Florida A&M defensive back Curtis Holcomb in the seventh round of the 2011 draft, but he never suited for a regular season game.

South Carolina State tight end Temarrick Hemingway was taken by the Rams in the sixth round last year. The 6-5, 244-pounder saw action in eight games as a rookie.

It’s been 23 years since Seattle chose a player from an HBCU. Seattle picked Hampton wide receiver Terrance Warren in the fifth round (114th overall) of the 1993 draft. A two-time national champion in the 200-meter dash, Warren never stuck in the NFL and called it a career after three unproductive stints with the Seattle, San Francisco and Jacksonville. He’s a Hampton and CIAA Hall of Fame member.

Arizona snatched up Delaware State defensive tackle Rodney Gunter in the fourth round in 2015. Gunter’s seen action in 32 games, logging 23 tackles, in his young career.

Tampa Bay grabbed North Carolina Central defensive back Ryan Smith in the fourth round last year. He played sparingly on defense as a rookie, but will have the chance to earn a spot in the rotation as a nickel corner this season. He also showed he’s a viable special teams player, racking up 169 yards on 10 kick returns in 2016.

The Saints invested a third-round draft pick in Arkansas-Pine Bluff’s Terron Armstead in 2013. The offensive lineman turned in an impressive performance at the Senior Bowl and a 4.71 40-yard dash (the fastest ever for an OL) at the Combine. He’s started in 36 of 40 career games. In 2015, he was selected to play in the Pro Bowl.

In 2000, the Falcons were impressed enough with Tennessee State’s Michael Thompson enough to spend a fourth-round draft choice on the offensive tackle. Unfortunately, he never panned out, starting in four of the 12 games he played in during a three-season stretch in Atlanta.

The Panthers took Arkansas-Pine Bluff cornerback Dante Wesley in the fourth round (100th overall) back in 2002. A two-time All-SWAC choice he enjoyed an eight-year career primarily as a reserve in the NFL, and also spent time with the Bears, Patriots and Lions.

Jackson State wide receiver Jaymar Johnson was the second of Minnesota’s two sixth-round picks in 2008. A three-year starter at Jackson State, he had just one catch for nine yards in the NFL.

Green Bay used their first-round pick in 2005 on a quarterback out of Cal named Aaron Rodgers. In the second round, they took Bethune-Cookman safety Nick Collins. The 51st overall selection wound up being a Super Bowl champion, three-time Pro Bowler and three-time second-team all-pro selection. In 2008, Collins tied for the NFC lead in interceptions with seven and led the league in interception returns yards with 295. A neck injury cut his playing days short. He never played again after the 2011 season and announced his retirement in 2014, finishing his career with 21 interceptions and 417 tackles.

Tuskegee defensive back Roosevelt Williams was the Bears’ third-round pick in 2003. In two seasons on an NFL team’s 53-man roster, he started in five games and registered 20 tackles.

Detroit took Florida A&M linebacker Brandon Hepburn in the seventh round in 2013, and later signed him to a futures contract before releasing him. He’s yet to see action in the NFL and has also had occupied space on the Eagles’ and Cowboys’ practice squads the past few seasons.