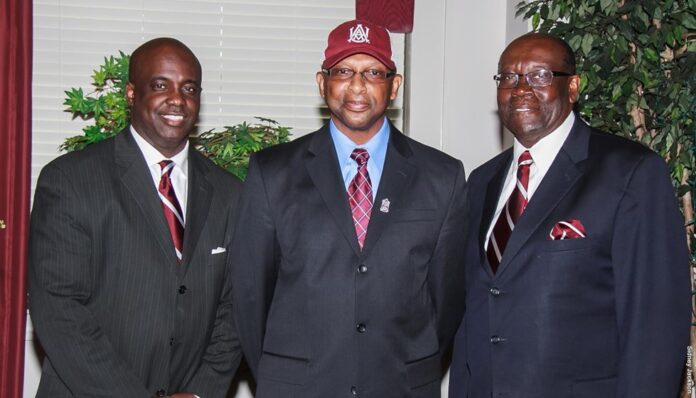 HUNTSVILLE – A new era of basketball was proclaimed Wednesday when Donnie Marsh was introduced as the Alabama A&M men’s basketball head coach.

“A new era of Bulldogs basketball begins today,” Director of Athletics Bryan Hicks said at a press conference at the Knight Center on the Alabama A&M campus. “We were looking for a developer of men … we found that person.”

Marsh has served as the associate head coach at Texas Southern for the last two seasons and, in all, has been an assistant coach for the last 13 seasons with stops at Indiana, Alabama-Birmingham, South Florida and Texas Southern.

“This is 13 years in the making,” he told a packed audience. “Anything worth having is worth waiting for. This is an incredible honor and I am humbled by the opportunity.”

Alabama A&M President Dr. Andrew Hugine Jr. said the university is excited and commended the search committee for its work and diligence.

“The result today comes after much consideration, a national search and a committee that did a wonderful job,” he said. “We’ve got the best of the best.”

“I am grateful for the opportunity to be here,” Marsh said. “Forgive me for my bias, but I believe I was the right man, too.”

A 1979 graduate of Franklin & Marshall College in Pennsylvania with a bachelor’s degree in history and education, Marsh earned All-American honors and helped the Diplomats to a 27-5 record and NCAA Division III Final Four.

The Atlanta Hawks chose Marsh with their third round pick (52nd overall) in the 1979 NBA Draft – one spot ahead of former Notre Dame center Bill Laimbeer, who was tabbed by the Detroit Pistons.

After a brief professional playing stint, Marsh spent six years as associate director of admissions, assistant basketball coach and head baseball coach at Franklin & Marshall. For one year, Marsh was president of Players in Action Inc., a firm that represents professional athletes.

Marsh made his head coaching debut at Division III Elizabethtown (Pa.) College, where he compiled a 12-13 ledger in 1988-89 before moving on to The College of New Jersey.

Marsh and his wife, LaRoyce, have a son, Tyler, and a daughter, Sydnee.