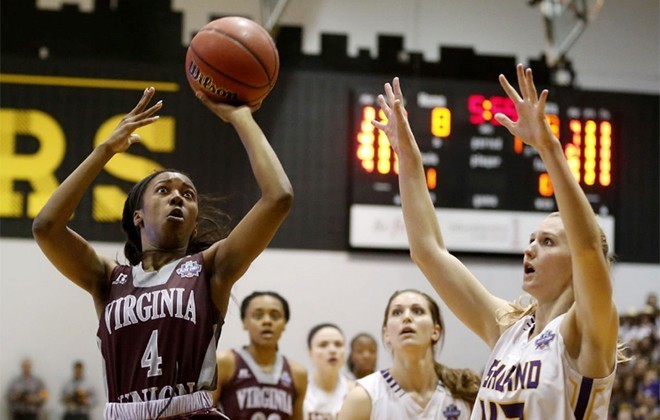 COLUMBUS, Ohio — Virginia Union might not have been the best team in its national quarterfinal and semifinal, but it was the best team on those nights.

However, No. 1 Ashland was the best team all season, and that was no different in the NCAA Division II women’s national championship Friday night at Ohio Dominican University’s Alumni Hall in Columbus, Ohio.

Alexis Johnson scored a season-high 28 points, and Lady Walker had 19, but the Panthers lost 93-77 loss to the Ashland Eagles.

Ashley Smith scored only 6 points following her 28-point performance in the semifinals for Virginia Union, which finished national runner-up for the second time in program history.

Union (28-5) had the lead at points in the second quarter and trailed by just 2 halfway through the third quarter. But from the five-minute mark on in the third, Ashland took over the game, outrebounding the Panthers 19-13 in the second half and expanding its lead to 16 points in the fourth quarter.

“They finished their easy baskets, where we missed a lot of easy baskets,” VUU coach AnnMarie Gilbert said. “Oftentimes, it looked like we were playing a little fatigued or just not balanced.”

Virginia Union made its first three field goals of the third quarter, cutting the deficit to 1. But with VUU down 2 with 5:07 remaining in the quarter, Ashland went on an 8-2 run in a span of three minutes with only one made field goal. Maddie Dackin hit six free throws before the end of the third, giving Ashland a commanding 68-58 lead.

An Alex Henning layup and a 3 from Johnson put the Eagles up 15 to start the final quarter, and they never led by fewer than 12 points in the fourth. Ashland made 18 of 20 free throws in the second half and 20 of 22 in the game. Virginia Union was 5 of 15 from the line.

“In a game in this magnitude, you cannot miss assignments, you cannot leave shooters wide open, you cannot miss free throws,” Gilbert said. “All the little things that took for us to get here, we just failed in some of those areas today.”

Virginia Union struggled to convert from the floor early, missing 10 of its first 14 shots, where Ashland hit at a 64 percent clip in the first quarter.

In the second quarter, the Panthers started with a 7-0 run to take a 3-point lead before Ashland’s second-ranked 3-point shooting was on full display. The Eagles hit 5 of 9 shots from beyond the arc in the quarter, but Union hung with the No. 1 team, with 20 combined points from Walker and Johnson in the quarter.

For 30 minutes of the game, the margin was either one or two possessions. However, what had gotten the Panthers to the title game was their rebounding, and Friday night, after grabbing 60 rebounds as a team in the semifinal, Virginia Union was out-rebounded 37-34.

The offense proved particularly difficult for Gilbert to solve. She said her team had yet to play a team that plays like Ashland.

In Johnson’s first year in the program, she was one of the most productive players and led the team in scoring in the national championship — A feat she credits to Gilbert.

“It’s a learning experience,” Johnson said. “We want to come back and make sure we learn from our mistakes.”

It is Ashland’s second national championship in four years, winning it all in 2013 also.

Virginia Union made the national final in Gilbert’s second year at the helm, proving the program is trending in the right direction.

“We are a program that is on the rise,” Gilbert said. “We are rebuilding a program that won a national championship in 1983, and the Lady Panthers are back.”