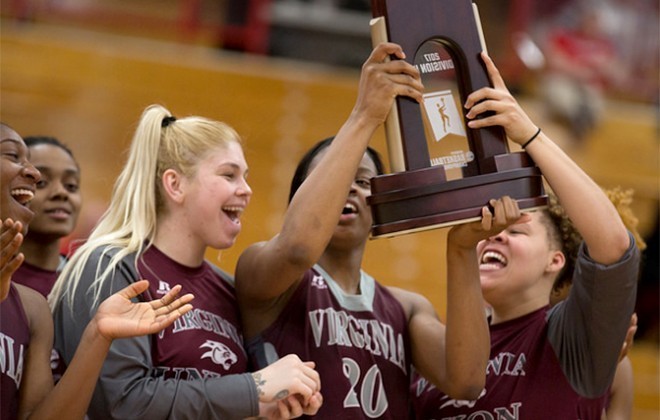 Walker, the CIAA player and defensive player of the year, scored a game-high 32 points on 14-of-23 shooting from the field and 4-of-4 from the free throw line. She pulled down 10 rebounds and added two steals.

Ashley Smith chipped in 15 points for the Panthers. Alexis Johnson had 12 rebounds and four blocks to go with her 9 points.

Walker, who also had 10 rebounds, dominated play inside when Virginia Union had the ball. She scored 20 of her 32 points in the first 2½ quarters as the Panthers forged a 20-point lead.

California got off to a lousy start, missing its first seven shots. The Vulcans fell behind 13-6 before getting a spark from Cooper, who played in only two regular-season games but scored in double figures in each of the first two regional games. Cooper’s basket started a 6-0 run that pulled Cal to within 13-12.

“We wanted to take the wind out of their sails early,” said Virginia Union coach AnnMarie Gilbert. “We knew they were playing with different pieces and without their floor general at point guard.”

The teams traded baskets for the rest of the quarter, which, at times, was played at an NBA-like pace. Virginia Union led 19-16 after one quarter.

The Panthers led 23-18 before going on an 8-0 run with Walker scoring six points. Virginia Union led by as many as 14 points late in the second quarter and took a 37-26 lead into halftime.

Virginia Union had a whopping 68-38 edge in points in the paint. The Panthers attempted only one three-pointer.

“We knew California’s emphasis is in the paint. That was our focus on defense,” Gilbert said. “We wanted them to shoot from outside and I don’t think they ever figured out the zone. We kept sagging deeper and deeper. I got made whenever we stepped out past the foul line on defense.”

Cal shot only 27 percent in the first half but the Vulcans were able to stay within striking distance by grabbing 12 offensive rebounds and using an attacking half-court trap to force 14 Virginia Union turnovers.

Virginia Union dominated the third quarter, making 10 of 16 shots to take a 63-42 lead into the final 10 minutes.

The Panthers shot 54.7 percent from the field and held the Vulcans to 35.3 percent.

The Panthers are scheduled to play their Elite Eight game on Tuesday, March 21, in Columbus, Ohio.