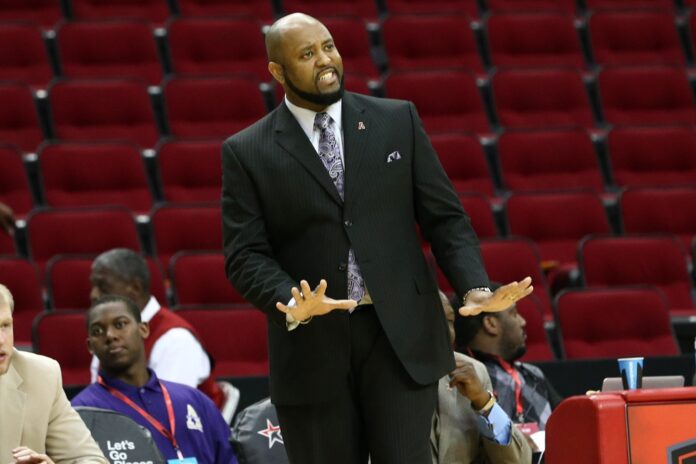 In nearly 30 seasons at the helm, during a career that spanned six decades, Whitney captured 12 SWAC regular season titles and won the conference tournament six times. However, in the 14 years since he last strolled the sidelines, the Braves haven’t built upon the championship foundation the National College Basketball Hall of Fame member laid.

It’s been a long time coming, but second-year coach Montez Robinson is trying to restore the feelings.

Alcorn’s 68-67 win on the road against Southern this past Saturday was its 11th-straight victory. At 16-11 (13-3 in the SWAC) the Braves hold the sixth-longest active winning streak in the nation. The mark is just one shy of a school record. More importantly, the triumph against the Jaguars secured Alcorn one of the top two seeds in the SWAC tournament set for March 7-11.[easyazon_infoblock align=”right” cart=”y” identifier=”B011DS9XRI” locale=”US” tag=”hbcusports-20″]During the streak, which began with an 82-64 win at home against Arkansas-Pine Bluff back on Jan. 16, the Braves have increased their scoring output to 75.8 points per game. That’s 10 more than the number they put up through their first five contests.

Teamwork is making the dream work for Alcorn.

Three Braves, a group comprised of junior Reginal Johnson (15.7), senior Marquis Vance (11.2) and A.J. Mosby (10.1), are among the league’s top 20 scorers. They lead the league in assists (13.6), 3-pointers made (7.3) and defensive rebounds (26.3) per game. Alcorn also ranks among the top three in the SWAC in scoring defensive, field-goal percentage, blocks per game, 3-point field-goal percentage and assist-to-turnover ratio.

“It’s amazing what can happen when no one cares who gets the credit,” Robinson told Charles Edmond, the voice of Alcorn State athletics, after the Southern game.

It’s been a stellar showing for Alcorn, but now it has to prove its mettle against the only opponent that truly matters.

Thursday, the Braves travel to Houston to face Texas Southern, a team that’s been there, done that and has the T-shirts. Led by veteran coach Mike Davis, who’s had previous stints at Indiana and UAB, the Tigers have won three of the last four SWAC regular season and tournament titles. They’ve copped both the past two seasons and are vying to make it a three-peat this season.

If the Braves keep the streak going, and beat the Tigers, a team they haven’t defeated since 2008, they’ll have put the entire league on notice. Who knows? Maybe, they’ll change the power dynamic in the SWAC.